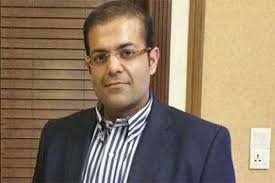 ISLAMABAD:    National Accountability Bureau (NAB) on Sunday has decided to take Interpol’s help for extradition of Pakistan Muslim League-Nawaz (PML-N) President Shehbaz Sharif’s son Salman Shahbaz.
According to media reports the anti-graft watchdog will provide all the evidences against Salman Shahbaz to the national crime agency.
Salman Shahbaz is absconder in money laundering case and non-bailable arrest warrant has also been issued against him, the bureau stated.