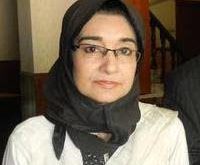 Lahore: The sixth session of “Kush Yaadain Kush Batain”was held at the Alhamra Arts Centre,the Mall. Renowned film, television actress Seemi Raheel was the guest speaker of the 6th episode of “KYKB”who shared her life experiences about her journey with the audience. Seemi Raheel said that I performed positive role always, Pakistan holds its unique place in acting all over the world, our young people are capable in the field of acting, I worked for the betterment of the society, She said that Moneeza Hashmi has great eyes who recognize my art and she encouraged me,she has vital role in my success. Seemi Raheel said to the younger generation, “Do your job honestly because this is the most important thing in your life to get true success. Seemi Raheel thanked and appreciated the initiative taken by Chairperson BOG Lahore Arts Council Moneeza Hashmi who was also present at the event.

Chairperson Board of Governors, Lahore Arts Council Alhamra Moneeza Hashmi has said that Seemi Raheel is a senior actress, who has worked hard throughout her career, her acting is very good, leaving many roles that hinder social values. She said “We talk to the youth through this seat, the representatives of the new generation are benefiting greatly. She thanked Seemi Raheel to be there with us because she is big reference of acting.

Executive Director Alhamra Ather Ali Khan said that Lahore Arts Council’s initiative “Kush Yaadain Kush Batain” provided the audience with an opportunity to listen to their favorite personalities. He further said that Seemi Raheel’s acting is unique due to her great style .

Today’s session was enjoyed by the audience .The public admired and appreciated the efforts of the Lahore Arts Council.