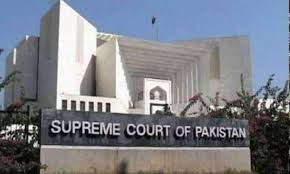 ISLAMABAD: Supreme Court (SC) has constituted commission on drinking water situation in Balochistan and has summoned report within two weeks.
A 3-member bench of SC presided over by Chief Justice of Pakistan (CJP) Mian Saqib Nisar heard the case pertaining to water crisis in Bhagnari, area of Balochistan Friday.
The video of water pond in Bhagnari was run during the hearing of the case.
The CJP remarked on seeing the video water is loaded and carried on donkeys from pond. Balochistan government should see this video that water like this is being supplied to people for drinking. They are playing with the lives of people by providing such water for drinking. No one has installed RO Plant.
DC Bolan told the court water shortage in the area is major cause behind all problems. Provincial cabinet has approved Rs 75 million after suo motu notice has been taken by the court.
A resident of Bhagnari told the court “ our condition is worse than Thar. Our territory is at a distance of 200 kilometers from Quetta. Water supply scheme is dysfunctional since 2000 in Bhag Nari. The population of Bhagnari has reduced to 273000 due to water shortage.
CJP remarked it is responsibility of concerned people to clean the water. They should treat water of pond at least. Water situation like this prevails in several areas in addition to Bhag Nari.
Shah Zain Bugti, MNA during the hearing of the case informed the court that he is grateful to it for taking suo motu notice of the matter. He has started installation of a tube well on his own expenses
He prayed the court to order inquiry into matters of water supply scheme in the area.
SC while forming commission under president SC Bar, Aman Ullah Kanrani on water situation in Balochistan sought report within two weeks.
The court has also ordered for installation of RO Plant in Bhag Nari within a month.
The CJP directed president SC Bar to give him report on wherever such situation prevails.
The CJP inquired “ has no one tried to drink water from RO Plant in Thar.
MNA Ramesh Kumar told the court there is no development authority in Thar. The situation in Thar will not improve unless authority is set up.