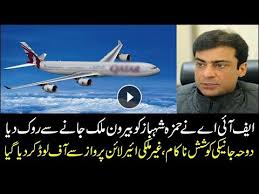 LAHORE: Leader of the opposition Hamza Shehbaz was offloaded on Tuesday from a Doha-bound flight by officials of the Federal Investigation Agency (FIA).
The former member of the National Assembly was barred from travelling to London on Qatar Airline’s flight 620 at Lahore’s Allama Iqbal International Airport.
Reports revealed that the PML-N leader was stopped from travelling as his name was part of the Exit Control List.
“When I reached the immigration counter, I was told that my name is on the black list. I am not wanted in the ongoing National Accountability Bureau (NAB) inquiry,” he revealed.
It was further revealed that Hamza was on his way to London to meet with his brother Salman who had already flown out of the country.