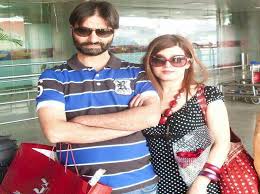 Saddia Mazhar,
ISLAMABAD: Mishaal Hussein Mallick, wife of
Chairman Jammu Kashmir Liberation Front Yasin
Malik, has appealed the International Human rights
organizations to take serious notice of the fast
deteriorating health condition of Yasin Malik, who is
central jail Srinagar since February 2018.
Chairperson Peace and Culture organization Mishaal
Hussein Mallick on Tuesday in her statement said
that Yasin Malik is suffering from multiple ailments
and recent confinements have taken a heavy toll
over his health which is fast declining.
“My husband living in Indian Occupied Jammu and
Kashmir has been denied a passport by Indian state
Authorities for the past six years. We desperately
want him to get his passport so that he can go
abroad for the best medical treatment as his life at
very high risk,” she added.
She said that he was taken to Soura Medical
Institute on Monday by police where doctors
examined the causes of severe back pain;
abnormality of INR, hepatomegaly with Fatty Liver
Grade 1 and recurring of multiple stones in his
kidneys.
The Chairperson said that his blood samples, USG,
INR, ECHO and other necessary tests were done and
his USG showed multiple stones in both of his
kidneys while his INR also showed abnormality due
to which doctors advised him to do more tests,
besides remaining in hospital for more days.
“Yasin is a chronic heart patient with a metallic
valve which requires a lifesaving drug on a daily
basis but is not being given to him on a daily basis,
thus risking his life from blood clotting for which he
has to see a doctor regularly to monitor his INR,”
she added.
Millick said that Physicians are holding the repeated
and prolonged incarcerations of JKLF chairman
responsible for his present deteriorating health
condition and advised to provide him suitable and
healthy environment.
However, she lamented that Indian State
Authorities at Srinagar central jail refused to accept
doctors’ advice and arrested Yasin on 6th February
2018 despite the warning of his weak health and did
not take him for the much-needed checkups nor
provided lifesaving medicines which further
deteriorated his health and he could not pass urine
for almost a week, adding that this denial of basic
fundamental rights is a travesty of justice and
democracy.
She went on to say that Yasin has been in and out of
jails and police stations from a long time and has
spent most of his time in incarceration centers but
from 2014 arresting and putting him in jails and
police stations has become a daily routine of so-
called Indian rulers.
She further added that our six -year-old daughter
Raziyah Sultana and I have been deprived of
meeting Yasin for the past four years because each
time we visit Srinagar we are harassed, attacked
and abused by the Indian authorities.
“He is fighting peacefully for the legitimate right of
self-determination in accordance to the United
Nations Security Council Resolutions against the
highest occupation force of the world. I request you
to save my husband for the sake of humanity and
Global Peace,” the Chairperson maintained.
She urged that international human rights
organizations, United Nations Secretary General,
United Nations Human Rights Commissioner,
European Parliament Friends of Kashmir, APPG
British Parliament, Amnesty international and ICRC
to save my husband for the sake of humanity and
Global Peace.
As a Global Citizen and a wife and mother of a six-
year-old I appeal to you to put pressure on India to
release my husband and return back his passport so
that he can travel freely and not be caged, punished
or tortured for his peaceful political struggle, she added.