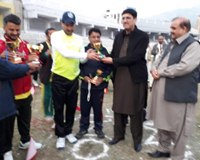 ISLAMABAD: (Parliament Times) Kashmir Journalist Forum Rawalpindi/Islamabad(KJFRI) has won Shujat Bukhari Shaheed Memorial T-10 Cricket Championship.
The tournament was organized by Kashmir Media Committee in memory of Editor Rising Kashmir Shujat Bukhari who was martyred by Indian forces in Srinagar.
The final was played between the team of Central Union of Journalist Azad Kashmir and Kashmir Journalist Forum Rawalpindi/Islamabad. The captain of CUJAK winning the toss decided to bat first and set a target of 79 runs for the opponent in the allotted overs.
Sensational hitting by openers Muhammad Fayyaz and Naveed Sudozai helped KJFRI comfortably win the match in 8th over for no loss.
Four teams took part in the championship that was held first time of its kind in Muzaffarabad.
Director Sports Malik Shaukat Hayat Awan and Director General Information Raja Azhar Iqbal distributed the trophies among the winner and runner up teams. They lauded the efforts of Journalists for holding sport activities especially in the memory of a great journalist who was martyred in India held Kashmir.

Parliament Times - March 7, 2021 0
By Kamran Khamiso Khowaja, Thatta: Primary School Teachers took out a rally and staged a protest against the new recruitment policy for teachers and not...

Farooq Haider asserts of retaining power in AJK through “land-slide”...

Kashmir is under siege, Knocking at world conscience : TeK UK...

We reject the vote of confidence, says Fazal