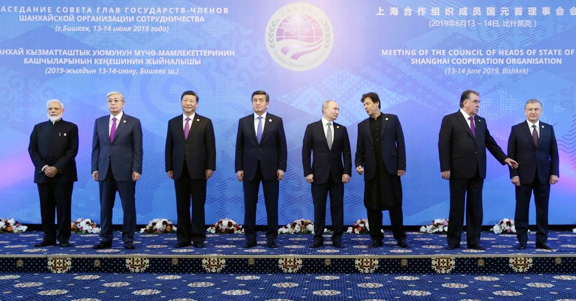 Dushanbe,(Parliament Times)  : Prime Minister (PM) Imran Khan has said the 20th anniversary of SCO is an important juncture to reflect on our journey so far. He added From the watershed moment in June 2001, SCO has come a long way. Guided by the “Shanghai Spirit”, SCO has steadily grown in size and stature.

Today, SCO cumulatively represents 44% of the world’s population, 25% of global landmass, and 20% the global GDP, he held. Impressive progress has been made in strengthening SCO’s normative and institutional basis, and in developing practical cooperation on SCO’s twin planks of security and socio-economic development.

He went on to say while SCO has done well to respond to old and new challenges, the increasingly complex global environment and geo-political tensions would test our resolve in the times ahead. For our part, we must resist any drift towards bloc politics and stress that peaceful coexistence and cooperation – not confrontation –should be the main drivers of global politics. He held the Covid-19 pandemic afflicted the world in unprecedented ways. In sheer human suffering, the cost just cannot be calculated. A staggering 4.6 million have lost their lives; 223 million have been infected. While the public health systems were overwhelmed, economies worldwide faced downturns and recession.

The poor were hit the hardest everywhere – whether living in the impoverished South or the affluent North. For the first time in 20 years, the world saw rise in absolute poverty.

We, in Pakistan, adopted a calibrated strategy of ‘smart lockdowns’ – with simultaneous focus on saving lives, securing livelihoods, and stimulating the economy. A very difficult road to navigate. Our social protection programme Ehsaas (compassion) helped millions of families to survive. He indicated I also launched a ‘Global Initiative for Debt Relief’ to help create fiscal space for the developing countries to mitigate the negative effects of the pandemic and achieve sustainable development.

The advent of Covid vaccine in a relatively short time is a miracle of science. We believe science should continue to guide the world’s efforts as it combats the pandemic. Attempts to politicize the question of virus origin should be avoided as it is divisive at a time when the world needs to unite. The vaccine should also be available to everyone on an equitable basis, and as a global public good. Climate change is another existential threat that our planet faces. Mitigating its effects is rightly commanding the highest priority on global agenda.

Pakistan’s contribution to global emissions is negligible, yet we are among the 10 most vulnerable countries. Addressing climate change is, therefore, a key priority of my government. We have taken a number of flagship initiatives to mitigate its adverse impacts, including the 10 Billion Tree Tsunami project.

He stressed Our initiatives for ‘Clean and Green Pakistan’ not only aim to protect nature and restore eco-systems but also expand eco-tourism and create thousands of new jobs for our youth. We are also committed to shifting our energy mix towards a clean and low carbon trajectory and are targeting 60 percent of our energy to be clean by 2030.

We continue to work with the international community towards comprehensive implementation of Paris Agreement and mobilization of enhanced international climate finance to achieve our shared objectives. As the world marked the 20th anniversary of the 9/11 attacks, we were all reminded that despite international community’s earnest efforts, the threats posed by terrorism still persist. He observed Associating one religion with terrorism has enabled far-right, populist and supremacist groups around the world to propagate, multiply and accumulate influence.

In some cases, such extremist and bigoted ideologies have ascended to capture the state power in so-called democracies. The fight against terror would not be won if we ignore these threats and challenges – the biggest of which is state terrorism, perpetrated against people living under foreign occupation in disputed territories. For decades, Pakistan has suffered from terrorism that was planned, supported, financed and orchestrated by state entities from across our border. Outside the active zones of conflict, no other country has suffered more than Pakistan. We have suffered over 80,000 casualties and economic losses in excess of U.S. $150 billion, apart for millions who internal displacement.

Yet, our resolve remains strong. We will continue to be a reliable and willing partner of the international community in the fight against terrorism and extremism. He underlined addressing threats to international and regional peace and security is a vital interest for SCO. We believe faithfully implementing UN Security Council resolutions for peaceful settlement of outstanding disputes is a necessary condition for peace, and indispensible for creating an environment of cooperation.

Unilateral and illegal measures to change the status of disputed territories in violation of Security Council resolutions run counter to this objective. Such measures must be condemned and opposed firmly for being in violation of the SCO Charter and its well-established principles of inter-state relations. Most significantly, Afghanistan is, rightfully, the focus of our attention in view of the recent developments. The sudden change of the previous government which surprised everyone, the takeover by the Taliban, and the full withdrawal of foreign forces, has established a new reality in Afghanistan. That all this happened without bloodshed, without civil war, and without mass exodus of refugees, should be a matter of relief. He underlined It is now in the international community’s collective interest to ensure that there is no renewed conflict in Afghanistan and the security situation is stabilized. Equally urgent priorities are to prevent a humanitarian crisis and an economic meltdown. We must remember that the previous government depended heavily on foreign aid and its removal could lead to economic collapse. This is a moment to stand by the Afghan people, firmly and unequivocally. He pointed out We commend the UN Secretary General and UN agencies for leading from the front in mobilizing international support for the immediately needed humanitarian assistance. Apart from helping in the international evacuation efforts, Pakistan has extended all possible support in the provision and facilitation of humanitarian relief. Going forward, we believe positive engagement of the international community with Afghanistan is extremely important. He underscored there is a rare opportunity to finally end the 40 years of war in Afghanistan; this moment should not be squandered. It would be unwise at this critical juncture to spread negativity, or indulge in mischievous propaganda, as some spoilers have sought to do.

This will only serve to undermine the prospects for peace, to the detriment of Afghan people. For their part, the Taliban must fulfill the pledges made above all for inclusive political structure where all ethnic groups are represented. This is vital for Afghanistan’s stability. Also, it is important to ensure respect for the rights of all Afghans, and ensure that Afghanistan is never again a safe haven for terrorists. As a country that has continuously suffered from the spill-over of conflict and instability in Afghanistan, and borne the burden of nearly 4 million refugees for 40 years, Pakistan has an abiding interest in a peaceful and stable Afghanistan. The history of Afghanistan bears witness to the fact that the country values its sovereignty and cannot be controlled from outside.

We will continue to support a stable, sovereign and prosperous Afghanistan. He held sustainable peace and stability in Afghanistan will also help us realize our vision of an inter-connected, prosperous and economically vibrant region. In Pakistan, we have shifted our focus from geo-politics to geo-economics. Our new economic security paradigm has three central pillars: peace, development partnerships, and connectivity.

Pakistan’s geostrategic location as a natural bridge connecting Central Asia with South Asia finds its manifestation through the platform of SCO. He observed Pakistan offers the shortest route to the sea for many of our partners in Central Asia. I commend the initiative by the President of Uzbekistan to host the International Conference on Central Asia-South Asia Connectivity in Tashkent last July. There is no doubt that the web of rail, road, sea and air links across the SCO region will usher in a new era of enhanced trade, energy flows, and people-to-people exchanges. This hard and soft connectivity will contribute significantly to progress and prosperity in the region and beyond. He sated these trans-regional linkages will be reinforced by the China-Pakistan Economic Corridor (CPEC), the flagship project of BRI, which is making steady progress. As we commemorate this milestone 20th SCO anniversary, I propose a five-point way forward:

One, We must reaffirm our complete support for effective multilateralism and the purposes and principles of the UN Charter, including equality and sovereignty of states, respect for territorial integrity, non-aggression, non-use or threat of force, and peoples’ right for self-determination.  Two, We must strengthen our collective endeavours to mitigate the adverse economic impact of Covid-19 pandemic, including through the SCO Joint Advisory measures. Three, We must chart out a coordinated SCO approach towards stabilizing the situation in Afghanistan — including through enhanced engagement to address our common concerns and safeguard our shared interests, steps to provide humanitarian support and ensure economic stability, and measures to enable Afghanistan to become a reliable partner in peace and prosperity. Four, We must advance the agenda of regional connectivity. In this regard, taking the process forward, Pakistan would like to host a conference on the theme “Transport Connectivity for Regional Prosperity” in virtual mode in 2022.