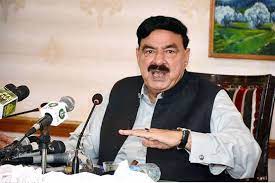 ISLAMABAD,  (Parliament Times) : Interior Minister Sheikh Rasheed has said that the incident of the Afghan ambassador’s daughter is not a kidnap case as it was portrayed, but the case had been registered. Talking to the media on Tuesday, Rasheed said that the government wants the Afghan ambassador should become part of the case. “The investigations into the alleged kidnap have been completed. There is a discrepancy between the application and the investigations,” he added. The Interior minister further added that the data of the phone given to investigators had been deleted. The minister claimed that China was satisfied with the investigations of the Dasu incident. “The hybrid war against Pakistan has started and attempts to defame the country will fail,” he maintained. He said that the attempts being made to create misunderstandings between Pakistan and China would not succeed. Sheikh Rasheed said that Maryam Nawaz had threatened to stage a sit-in in case of a defeat in Azad Kashmir. “The PTI will form the government in AJK on July 25,” he added.