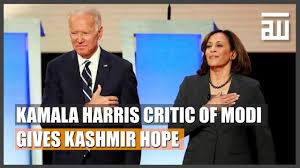 While the Republican Administration had refused to accept the human rights violation in Jammu and Kashmir,the Democratic Party leader Jeo Biden and Kamala Harris took a clear stance regarding Kashmir issue. Biden addressed with American Muslim Community and clearly stated that”In Kashmir ,the Indian government should take all necessary steps to restore the rights for the people of Jammu and Kashmir.”Biden also critique the Indian government policies about Muslims in India specially National Register of citizens (NRC) in Assam and a Citizenship Amendment Act (CCA). Kamala Haris the, the vice president of United States of America also high light this issue ,ethnic and ancester linking her to India and its stance on Kashmir issue is very important and hopeful. During her campaign human right activists fully support that’s why she is known as Advocate of Human Rights. She has been specially spoken about Kashmir issue. while answering a question regarding curfew,crake down on information,human rights abuses, enforce disappearance and violence against women and children in Kashmir,she said that”we have reminded that Kashmiris are not alone in World,we are speaking ,track on the situation.” She had a clear stance on Kashmir that with out respond of Pakistan,it is impossible to solve the issue,it’s not an Indian unilateral issue , it’s bilateral and World issue. she further said that with out Pakistan ,US could not play any meaning role in valley.She also stressed for the reprepsentation of the Kashmiris. In December 2019 ,she again involved herself in the US_Indian scuffle on Kashmir.In late 2019 ,Promalia Jayapla a US congressman submitted a bill in House of Representatives,in this bill Kamala urged to lift the communication clamp down ,she said that “Religious freedom for all Kashmiris resident”.For this reason when Indian External Minister refused to sit with Pramila Jayapala in diplomatic meeting, Kamala stood with Jayapala and said “no foreign government can tell us ,what members are allowed in capitol hill meeting.” Through out her career ,she is a strong advocate of Human Rights ,during her victory speech in Washington DC,she said that “the First time I walk to Courtroom I spoke a five words,Kamala Haris for the people.”She also spoke out for the Justic system in USA.In September 2019 she said”Kashmiris are not alone “. Kamala also critique on (CAA) and (NRC) depicts that she said Indian a secular country not an Authoritarian regime. When she was the District attorney of Sans Francisco she work for Justic,her critical achievement as California attorney as defending climate change laws , protection of Affordable care Act helping marriages equality for all California’s ,win $25 billion on settlement for California. Kamala Haris track record for the Human Rights is very good. Hope sustain,she will spoke out for the violence in Kashmir.