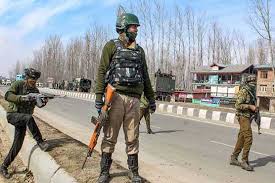 SIRINAGAR:    142 Kashmiris has been martyred during the last 10 months due to the Indian Army brutality in Indian Occupied Kashmir.
Lives of Kashmiris had been made a living hell by the Modi government since India illegally revoked the special status of occupied Kashmir on August 05, 2019. It said that the move was aimed at snatching away identity of the Kashmiris through changing the Muslim-majority status of the occupied territory.
The report revealed that Indian troops martyred 142 Kashmiris including 4 women during the period. It said that at least 1,300 people were critically injured due to the use of brute force including firing of bullets, pellets and teargas shells by Indian military, paramilitary and police personnel on peaceful demonstrators.
The report said that the troops damaged over 910 houses and molested 74 women during cordon, whereas thousands of freedom leaders and workers were arrested.
The report pointed out that India is carrying out genocide of the Kashmiri youth particularly, after August 05, last year, and destruction of houses and harassment of residents has become a norm in occupied Kashmir.

We have to review Sino-Pak relationship afresh:FM