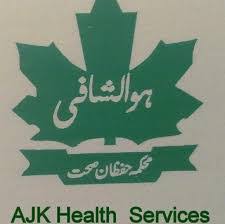 MIRPUR (AJK):    With the emerging of two new cases of coronavirus reported on Tuesday, the number of confirmed corona-virus positive cases rose to 51 in Azad Jammu and Kashmir, AJK Health department said.

Updating the situation of pandemic on Tuesday, the State Health Authorities confirmed registration of two more new cases – one each from Palandri and Muzaffarabad districts of Azad Jammu Kashmir.

After emerging of one new case tested positive the tally rose to 51 on Monday, AJK health authorities said.

23 of the Corona virus hit persons in AJK have so far been discharged. Those discharged included 03 from DHQ Hospital Mirpur, and one patient discharged from CMH Rawlakot and 05 from DHQ Hospital Bhimbher following completely recovery. Thus a total of 28 suspects tested positive are under treatment at various AJK hospitals at present and moving to the recovery, the State health authorities said.

As many as 55 new suspects of corona virus were tested in AJK on Tuesday.

Referring to the overall current COVID-19 so far situation in AJK, the Health Authorities continued in the handout that a total of 1410 suspected cases from entire Azad Jammu Kashmir were sent for test till Tuesday – of whom the result of 1335 have reached.

Since a total of 23 out of a total 51suspects were so far discharged after complete recovery, rest of 28 suspects tested positive across AJK were receiving treatment including only one patient admitted in Isolation Center in New City Teaching hospital, Mirpur, 05 in DHQ Hospital Bhimbher, and 08 admitted in CMH Rawalakot, one in DHQ Hospital Bagh and 08 in Palandri DHQ hospital and 02 in the State Isolation Center Muzaffarabad and 03 in tehsil Headquarter hospital Dadayal (Mirpur District) the updated breakup of the so far situation of the deadly virus said.

Since 1284 of the COVID-19 suspects across AJK were tested negative so far and all of them were discharged after formal test under SOP set by the medical advisory by the authorities in AJK,

Results of the tests of only 75 suspects are awaited which are scheduled to reach in a day or two next.

The State Health Department Staffers teams have been inducted at all exit / entry points leading to AJK for detailed required screening of the passengers pouring in to Azad Jammu Kashmir, according to the State Health authorities.

In case of the positive tests, all concerned are shifted to the nearest isolation center for Medicare, the state health authorities statement said .