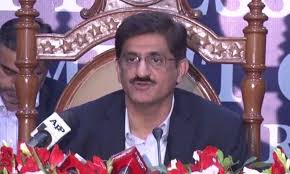 KARACHI:   The Sindh government on Thursday decided to form a task force on coronavirus, a day after Pakistan confirmed its first two cases.
The decision was taken in an emergency meeting headed by Sindh Chief Minister Murad Ali Shah to chalk out a strategy to prevent the spread of coronavirus. The task force headed by the chief minister will include the provincial chief secretary, health secretary, Commissioner Karachi Iftikhar Shallwani and other health officials.
The two cases confirmed in Pakistan included a 22-year-old male patient in Karachi who had travelled from Iran, where he acquired COVID-19. Special Assistant to Prime Minister on Health Dr Zafar Mirza said the second case was confirmed in an individual from the “federal areas”.
Addressing a press conference after the emergency meeting, the Sindh chief minister said that about 1,500 people have been identified who have returned from Iran or had come into contact with those coming from Iran and later entered Sindh in the past 15 days.
The chief minister added that according to their information, of the 1,500 individuals — 28 individuals may have been exposed to the virus in Karachi, and 5,000 individuals all across the country.
Shah explained that the first step is to check if the 1,500 individuals identified are manifesting symptoms of the virus.
“If yes, they will be tested. Not all 1,500 people and everyone they have been in contact with will be tested,” he said.
He said the patient in Karachi had come from Iran and was travelling with a contingent of pilgrims from Pakistan.
In response to a question, Shah said: “Trained personnel are going to meet people who have returned to Pakistan from Iran and ask them questions and test them for the virus, where needed.”
“People who have visited affected countries need to be tested and then, even if they test negative, they will still need to be monitored.
“In case someone tests positive, they will need to be isolated so that they do not come in contact with other people. One hospital is being dedicated for this [purpose] and equipment for those hospitals is being procured.”
Shah suggested that the concerned individuals remain in their houses for the 15-day period.
“We have had help from Aga Khan Hospital and Indus Hospital in training teams that will be able to test these people if they complain of any of the symptoms.”
Shah said he had asked Dr Abdul Bari of the Indus Hospital to procure ventilators for the Sindh government, adding that they would pay full price for these, adding that other equipment such as heavy-duty disinfectants and masks are also being procured.
“The Sindh government will acquire all equipment and masks related to the virus. We will pay fair price for these things to the vendors so that a fake shortage is not created in the market and people do not take unfair advantage of this situation.”
When asked a question about how his government plans to distribute the masks that they will procure from manufactures, the chief minister said: “The first step is to procure the masks so that unfair advantage isn’t taken of the situation. Once we have those, we will ask experts on how to distribute them or sell them, and so on.”
He said schools have been shut — not because of panic — but because the government wanted to test the children of those individuals who had returned from the affected areas in order to ensure that the virus doesn’t spread in schools.
Late on Thursday night, the Sindh government announced that educational institutions in the province would be shut today and on Friday (Feb 27 and Feb 28).
Discussing the provincial task force on coronavirus, the chief minister said: “There will be a meeting at the CM house at 7pm every day on coronavirus. There are 25 to 30 people who have been tasked with keeping tabs on the situation.”
With regards to flight traffic from Iran, the Sindh chief minister said: “Flights from Iran are still coming in. I am taking measures to move the federal government to shut those flights down, so that the situation does not spiral out of hand.”
He alleged that screening at airports was not being carried out properly.
“Maybe the federal government does not have proper resources for it, so I have offered the Sindh government’s help and also asked the private sector to jump in and help with proper screening at airports.
“It is important that people who already have procured the virus do not come in, so that this does not spiral out of hand,” he said.
“I am also taking this opportunity to tell the federal government that hospitals and doctors from the private sector are willing to help,” the chief minister reiterated.
“We need the media’s help in not spreading panic and making sure that awareness is spread about the virus.