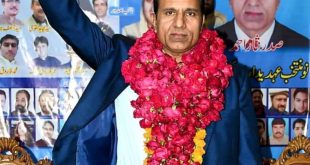 ISLAMABAD,(Parliament Times): Police registered a case early on Friday after one student was killed and several others were injured during a clash between two groups over an event at the International Islamic University Islamabad (IIUI) a day earlier.
According to police sources, 16 students have been arrested so far after a search operation at the university and hostels was completed. Police said no weapons were recovered during the search operation.
A First Information Report (FIR) was registered at the Sabzi Mandi police station on the complaint of a student, Fahad Khan, at the university under Section 302 (premeditated murder), 324 (attempt to murder), 148 (rioting, armed with deadly weapon) and 149 (every member of unlawful assembly guilty of offence committed in prosecution of common object) of the Pakistan Penal Code.
According to Fahad Khan, the ‘Mega Educational Expo’ was underway at the university’s activity centre when some individuals attacked it.
He said that speeches were ongoing during the event when at around 8:40pm, individuals from various counsels attacked the event, bearing firearms, glass bottles, iron rods, sharp tools, sticks and rocks.
The complaint cited various examples of the violence that ensued, which included a person being injured because he was hit on the head with an iron rod and two others sustaining bullet injuries.
As per the FIR, the suspects continued to attack those at the event and injured several students.
The injured were immediately shifted to a hospital, where a student Musmi Syed Tufail succumbed to his wounds.
Khan said the incident had caused a lot of fear in the university. People sought shelter in different areas in order to save their lives. According to the FIR, the suspects escaped from the site of the incident. The complainant said that he and others who were injured were witnesses to the incident at the university. He said that the suspects had not only damaged government property but their actions through a “thought out conspiracy” had also resulted in a death. The FIR called for legal action to be taken against those behind the incident so that the victims can be provided justice. Earlier, an initial police report had said that one of the groups planned an event but the other opposed it. In the evening, one group of students attacked members of the other group, injuring two. Later at night, the colleagues of the injured students attacked their rivals.A protest by students was held in Gilgit-Baltistan over the death of Tufail — who hailed from the area. Protesters held placards and demanded action against those responsible for the victim’s death.