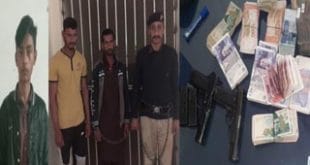 He maintained that people in IOK are facing shortage of food and medicines while patients are suffering due to illness.

“Our Youngsters are brutally manhandled and tortured in different jails by Occupied forces as they only demand for freedom” Uzair stated.

He added that our demonstration will be a referendum March against Indian occupation.

Vice Chairman International Forum for Justice and Human rights Mushtaq ul Islam said that humans rights are violated in IOK and International organizations have neglected us in such deteriorating situation.

He said that whenever we appeal to such organizations they express their concerns, “but this is not enough for the people of Kashmir, they demand investigation on heinous crimes of Indian armed forces in IOK” Mushtaq voiced.

Shaukat Javed Mir on the occasion said that Jammu and Kashmir is an issue between two nuclear powers and both forces are standing eyeball to eyeball, “I am astonish that why global peace organizations are still silent?” he asked.

Maulana Attiq ur Rehman said that thousands of people are waiting for our call to come out on the roads, we will come out on 26th September and condemn Indian atrocities in IOK.

Speakers in the press conference said that our peaceful demonstration is to demand plebiscite before long for justified and sustainable solution of Kashmir issue.

Kashmiri people are ready to fight with Pak Army for the liberation of IOK.

The rally titled “Indian Usurpers, leave our Jammu and Kashmir” will be held on 26th September from Bank square Chatter to United Nations mission office where protestors will present the condemnation resolution to UN addressing Secretary General Antonio Guetteres on Indian atrocities in IOK.