May 15, 2019 National News Comments Off on 3 accused arrested in Police-Rangers search operation 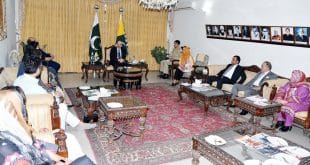 Karachi:    Three accused have been arrested in different search operation by Rangers and police.

According to media reports Korangi Industrial Area Police and Rangers on information cordoned off the area and blocked the entrance and exit point of Bilal colony.

On the information of presence of suspicious people in Sight Super way and Sohrab Goth, police cordoned off the area for combing operation. Police blocked the entrance and exit points of the area and started search operation house to house however no key l accused was arrested.
This combing operation is being headed by divisional Officer Sohrab Goth and IT team was also there for investigation of particulars , SSP Malir Irfab Bahdur said.

LAHORE: In order to induct 956 MW power from wind power projects to the system, …