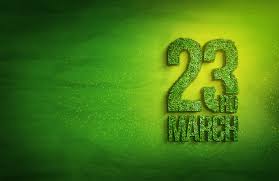 MIRPUR (AJK): In Azad Jammu & Kashmir, all is set to celebrate the sanctified Pakistan Day on Saturday – March 23 with a newest resolve to smash the manacles of the tyrannical Indian invaders—making them quit the illegitimately held part of the paradise on earth instantaneously, it was officially said

A well-uniformed contingent of AJK Police will present salute to the national flag. The ceremony will be attended by the elders from diverse segments of the civil society.

A grand ceremony to observe Pakistan Day will be held at Mirpur University of Science & Technology, Main Campus on Saturday jointly under the auspices of the MUST and the state-run Special Communications Organisations (SCO) where speakers will highlight the significance of the historic day.

With a dazzling zest to affix their destiny with Pakistan at all costs, the day will dawn with special prayers at Fajr, in the mosques on both sides of the fragile LoC—standing between the kin—by bowing before Almighty Allah, The Most Gracious n’ The Most Merciful for the evaporation of the obstacle so that the Kashmiris could establish interaction with each other freely—which is palpable only with the exit of the intruders—the Indian troops from the occupied Jammu n’ Kashmir. They will also pray for the translation into reality of the resolution of July the 19th in 1947—adopted at the Srinagar residence of Sardar Mohammad Ibrahim Khan, wherein the pragmatically represented 70-stalwarts assemblage of Kashmiris—with Ch. Hamidullah Khan in the chair—had resolved with one voice to link the destiny of the State with Pakistan alone ‘because the heartbeat of Kashmiris has been, is and would continue to remain synchronized with their Pakistan brethren alone.

The people of the Jammu & Kashmir state – living in Azad Jammu Kashmir and Indian occupied Jammu & Kashmir plus elsewhere will simultaneously pray for the stability, security, affluence and swift progress of Pakistan and for the early success of the Kashmiri’s freedom movement.

The scheduled special Pakistan day flag-hoisting ceremonies in all small and major cities of the liberated territory will be the hallmark of the day. The major ceremonies will be held in all ten district headquarters of AJK including Muzaffarabad, Neelam valley, Mirpur, Bhimbher, Kotli, Bagh, Sudhnoti and Rawalakot, Hattiyaan and Haveili districts.

Parliament Times - February 25, 2021 0
Azmat Khan There has been enough talk by the governmentover the past couple of years regarding revolutionizing government organizations through institutional reforms to make them...