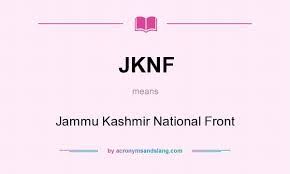 SRINAGAR: Strongly condemning the brutal custodial killing of school teacher, Rizwan Pandit of Awantipora, Jammu Kashmir National Front has rejected the government probe into the killing and demanded an impartial investigation into the matter so that the culprits are brought to book.

The National Front spokesman said in a statement that had culprits in such dreadful events been punished under law in past an innocent school teacher would not have been killed by the men in uniform.

He stressed upon the international rights bodies to move beyond issuance of statements and take practical steps in order to save the Kashmiri people from those in uniform and who claim to be their saviors to hoodwink the world.

He said that lawlessness is going on the disputed region which is resulting in the killings of our innocent youth and the government forces are doing whatever they like in the garb of law and order.

The National Front spokesman condoled the parents of Shaheed Rizwan Pandit and expressed solidarity with his close relatives. He also said that such incidents are a blot on the face of the civilized world which is a mute spectator to the Kashmir situation.