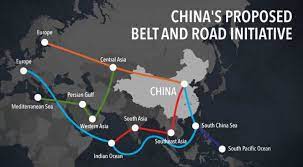 Ghulam Asghar Bhutto
China is an ideological, largest developing, most bordered, nuclear state and most populated country located in Asia.The BRI came to light in 2013 and until 2016 it was known as OBOR-One Belt One Road. The proper outline of BRI was issued on March 28, 2015, by the National Development and Reform Commission (NDRC), the Ministry of Foreign Affairs (MOFA), and the Ministry of Commerce (MOFCOM) of the People`s Republic of China (PRC), with authorization of the State Council. An amount of 4 to 8 trillion USD has been estimated to fully fund the BRI. The Belt Road Initiative BRI is an intercontinental and long-term policy of investment, which aims at infrastructural development and economic integration of participant nations. The infrastructure development is consisting of, construction of roads, highways, motorways, railways, bridges, tunnels, building dams for water supply, generating electricity, promoting greenery, or planting trees. While internet connectivity, telecommunication, and several others are also included in BRI. The initiative puts a major focus on developing markets especially in Asia, Europe, and Africa. According to the BRI portal, some 71 countries are joining the initiative that accounts for more than a third of the world’s GDP that’s a huge amount and two-thirds of the world’s population. As mentioned earlier China is the most populated state. So, as per a report, China’s population is equivalent to 18.47% of the total world population.If we observe its aims that are; to advance the interconnectedness of Asian, European, and African continents as well as waters (oceans) that connect them; building and enhancement of ties between nations; set-set up multi-tiered, multi-dimensional, and composite connection networks and to achieve diverse, self-sufficient, balanced and long term growth of these nations. BRI is a blessing for the third world after the cold war, to benefit from it, the third world should play its crucial role in making and implementing strategies in true means. While to counter USA military-oriented influence in Indo-pacific, the associated members of BRI should cooperate with China at every front. Apart from economic and infrastructure development, BRI could be beneficial for resolving regional disputes, tensions, abating terrorism, and crisis. As stated by Li Keqiang “China is opposed to terrorism in all its manifestations. China will remain committed to the path of peaceful development and uphold regional stability. We have no intention of competing for supremacy with other countries.” So, it’s expected that China could be involved to promote peace in nations that are taking part in her initiative.In a nutshell, if the policies are fully implemented to boost up the economic and infrastructure development. BRI could be fruitful for developing, especially the third world countries; like Pakistan, Afghanistan, Sri Lanka, Nepal, Bhutan, Iraq, Iran, Libya, Tunisia, Morocco, and so on from African, South American, and Southeast Asian nations.