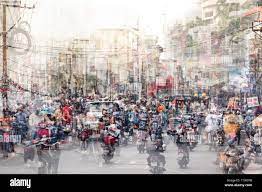 Saeeda Aziz
During the last two centuries, there has been a craze among people to migrate to big cities, so as a result of which the cities have been getting crowded. The city life does look glamorous from a distance. So there is no wonder that people residing in the countrysides find the temptation irresistible and Forsake their life in natural surroundings for the superficial glitter of the cities. But what surprises one is that they keep clinging to the cities in spite of early disenchant. That the life in big cities has a few advantages that cannot be denied, but the advantages are very few while the inextricable caught trap of problems that he never gets an opportunity to avail himself of those few advantages.Life in a crowded city like Karachi or Lahore is beset with numerous chronic problems, Foremost among which is the problem of finding a tolerably decent accommodation at a reasonable rent. Rents being overmuch, often a family of as many as six to seven members is forced to be huddled into a single room tenement in miserably poor surroundings and awful Sanitary conditions with privacy gone from the life of the couples and the children in School and colleges finding no congenial atmosphere to study in. Little Charm is left in life. The residence is often inconveniently situated, being far away from the place of one’s work or from the institution where one’s children are studying. There is the anxiety to reach the office or the university in time and the hurry to get back home in time in the evening. Most of one’s time is spent in this onerous and mechanical routine. In addition to this, there are various other irritating problems there are frequent power failures that can plunge the city into darkness at any odd hour. There is the scarcity of water, particularly in Summer. with the factories continually emitting dense smoke as well as the smoking vehicles moving about at all hours of the day, there is a very little chance of getting clean and fresh air. There is hardly any moment of peace and quietude.The tempo of life in a crowded city is very fast. The spirit of competition tends to be more acute in a city than in a village. the rate race for money and power is also more fierce in a city. This creates lite unnecessary tension in the minds of the people. The city-dwellers seldom seem to be relaxed. There must be one thing or the other hanging heavy on their nerves.People of refined sensibility find it very difficult to adjust with the unending whirl of life in a Crowded city. They get disgusted with the ‘fever and Fret’ of the city and seek consolation in the company of nature. So, living in a crowded city does not imply that one is living among friends. In fact, in big cities people are so self-centred, so much absent with their personal affairs that they hardly have the time to look at anyone else. The whole village is present to attend a wedding or a funeral and visitors to anyone’s house are welcome as a guest to the whole village. But such a feeling of community life is never to be seen in a crowded city. In a big city, there are no neighbours, there are only strangers. The cities are so soulless that though surrounded by a crowd.Life in crowded cities as conceded earlier is not without its compensations. On account of their having a large population, various facilities in the field of education, culture, health, etc. have to be centred there.They have laboratories and libraries equipped with elaborate scientific apparatus and rare books and documents. This breeds a great deal of discontent among people. Shelley felt so disgusted with the city life that he wrote. “Hell is a city much like London, a populous and a smoky city!”. And what he said about London is almost equally true of every other crowded city.