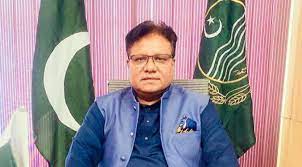 LAHORE: Provincial Minister for Human Rights Ijaz Alam Augustine said the strong role of the youth in nation-building is commendable as youth is an integral part of the population.

While talking to a youth delegation from different parts of the country at his office on Monday, the minister assured full support to the voluntary activities by the HR&MA department. Pakistan is our beloved homeland and youth should be made self-reliant as it is the future of Pakistan, he added. He said the people who serve the people are valuable assets of the country and role models for society.

The minister said Pakistan is the common homeland of all of us and the interaction of youth from different regions would give them an opportunity to learn from each other. He said the government has included the minority community in the national mainstream of development and they have been provided with ample resources for socio-economic development. Heads of youth organizations from different parts of the country including Quetta, Gilgit, Skardu, Islamabad and Lahore were present at the meeting.