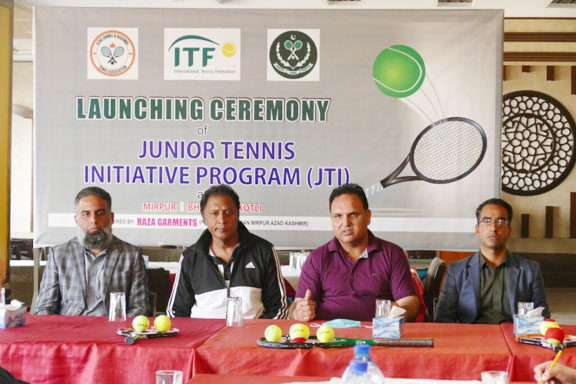 MIRPUR (AJK),(Parliament Times): A broad-based International Tennis Federation – backed Junior Tennis Initiative (JTI) Program has been launched in Azad Jammu Kashmir through the national body of Pakistan Tennis Federation (PTF) and AJK Tennis Association in order to promote the world-fame tennis-ball game in AJK through the mutual coordination with both private and public sector educational institutions and other stake-holder institutions in the State. Launching of the integrated phased Junior Tennis Initiative program is primarily aimed at to produce the quality tennis players from Azad Jammu Kashmir for participation in national and international contests.

Elaborating the integrated phased junior tennis initiative program, the Pakistan Lawn Tennis Association Coordinator Hamid Niaz said that it was aimed at to promote the tennis game from grass-root level with prime focus to the produce quality future architects of the nation through this most healthy and energetic world-reputed game through the primary as well as high schools functioning in private and public sectors besides under the auspices of the semi-government institutions in Azad Jammu Kashmir. “AJK Diaspora settled abroad including the United Kingdom will also be involved in this Junior Tennis Initiative Program through their patron-ship of the tennis to be held both at home and abroad”, he revealed.

Niaz continued that initiative to promote tennis-ball game was taken the formal affiliation of the AJK Tennis Association with Pakistan Tennis Federation (PTF) was recently materialized with basic objective to introduce and promote this world-fame game of sports world in the State of Azad Jammu Kashmir. He underlined that the PTF Head Salim Saifullah Khan was kind enough to materialize the affiliation of the AJK Tennis Association with the Pakistan Tennis Federation as legitimate and affiliated body of the Federation, he added.

The Pakistan Lawn Tennis Association’s Coordinator Hamid Niaz said that in Azad Jammu Kashmir, the JTI program has been launched, at its first leg, in all three districts of Mirpur division including Mirpur, Kotli and Bhimbher where free of cost equipment (tennis and balls) has been provided to 06, 03 and 07 private and public sector schools respectively along with the required coaching staff, he added.

Hamid Niaz further said that the JTI program will also be comprising the capacity-building training workshops in all AJK districts including the above three districts of Mirpur division according to the stipulated schedule. The program, he underlined, was launched after the huge potential and interest among the young generation for promotion of the tennis game was found in Azad Jammu Kashmir – right from the grass-root level. He said that in Mirpur, the full-fledge tennis court is available in Govt. Post Graduate College premises to launch the program – besides the identical tennis lawns at Mirpur Officers Club and the Kashmir Orphan Relief Trust (KORT) Educational Complex at Khaliq Abad in outskirt of Mirpur city, he added. Senior Vice President AJK Lawn Tennis Association Javed Bostan, Habib Jiraal Secretary General AJK Lawn Tennis Association and Prof. Zaffar Baber Iqbal , Coordinator AJK Lawn Tennis Association told the news conference that Pakistan Tennis Federation was very happy by granting affiliation to the AJK Tennis Association for the sake of the tennis fame talent hunt in Azad Jammu Kashmir from grass root level – set for the lads of the age of 05 to 14 years. The training program, they underlined, will also help in to produce the teachers of physical education in the educational institutions besides the tennis coaches for onward producing the local tennis stars for future participants of local, national and international contests from Azad Jammu Kashmir.