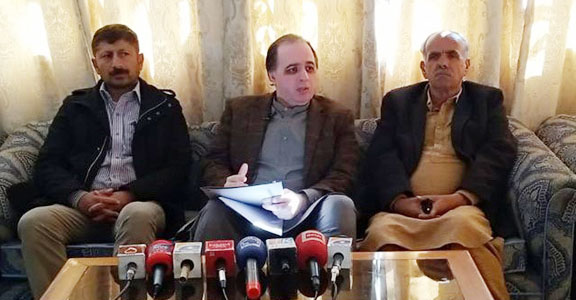 NEELAM,(Parliament Times) : Azad Kashmir Minister for Communications and Public Works Chaudhry Azhar Sadiq has said that the Prime Minister of Pakistan Imran Khan is very much interested in the promotion and development of tourism in Neelam. The PTI government is working for the welfare of the people as per the vision of the Prime Minister of Pakistan Imran Khan. The construction of Neelam Highway from Athmaqam to Taubat will be done through NHA. The standard construction of Neelam Highway will promote employment and tourism to the locals in Neelam. Neelam is a very beautiful area, most of which is located on the Line of Control.” We will not compromise on the quality of construction of 90 km roads in Neelum. We will build 6 bridges to provide transportation facilities to the people living across the river Neelum”, he said. These views were expressed by Minister for Communications and Public Works Chaudhry Azhar Sadiq while addressing a press conference at PWD Guest House, Athmaqam. He said that The federal development package of Rs. 520 billion will change the destiny of Azad Kashmir. The federal development package will be spent for the welfare of the people as planned. He said that most of the bridges on the Neelum river have completed their natural life which need to be rebuilt. The purpose of Neelam’s visit is to review the objective situation here and to inspect the 10 ongoing projects. The PTI government in Azad Kashmir will not tolerate corruption at all and by reforming the accountability process, the people’s money will be spent only on the welfare of the people. Chief Engineer Highways North Raja Muhammad Sharif Khan, Director Central Design Imran Khan, Superintendent of Highways Syed Najamul Hassan Gilani, SDO Highways Headquarters Asif Asadullah were also present on the occasion. Neelam’s highways will be constructed according to international standards so that modern travel facilities can be provided to tourists and citizens. He directed the officers of the Highways Department to ensure safety measures and installation of sign boards on Neelam Highway. He stopped paying contractors until the roads were fully constructed and safety measures such as safety walls and signboards were installed. Traffic rules and other safety measures should be ensured to prevent accidents on Neelam Highway. He said that he himself would continue to inspect the roads and other development projects. District President Tehreek-e-Insaf Syed Sadaqat Hussain Shah and others were also present on the occasion.