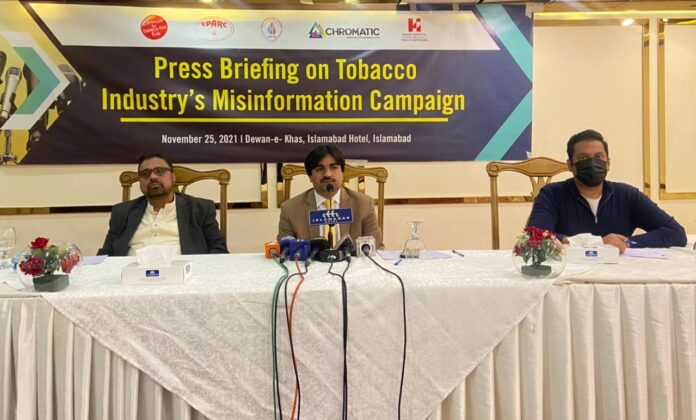 ISLAMABAD ,   (Parliament Times) : Society for Protection of Rights of the Child (SPARC) and its partner organizations Pakistan National Heart Association (PANAH), Chromatic Trust expressed concerns on tobacco industry misleading the policymakers and public through disinformation campaign. During a Press briefing on Tobacco Industry’s misinformation campaign organized at local hotel, tobacco control activists urged the government not to fall for the deceptive tactics and increase the taxation on tobacco products to safeguard Pakistani youth from its harms.
Mr. Shariq Mehmood Khan, Chief Executive Officer, Chromatic Trust told the media persons that as soon as there’s any talk of increasing taxation according to the recommendation of World Health Organization, the tobacco industry misleads people about illicit trade. The industry overstates the percentage of illicit trade and blatantly hides its practices of underreporting.
He further added that last year there was a talk of increase in tobacco taxation but the industry launched a digital media campaign to mislead the masses. Renowned celebrities were misled in producing ‘one sided, half true’ video messages which mislead the masses. Common folks watching these videos assumed that the national exchequer is facing losses only due to smuggled products and not because of big tobacco industry.
Dr. Ziauddin Islam, Public health consultant and tobacco control expert said that countering tobacco industry’s disinformation campaign is need of the hour. Hike in prices is required to save lives, along with strict implementation of laws regarding graphic health warnings, promotion and advertising bans, and smoke-free places.
He further added the annual cost of treating diseases caused by tobacco use is Rs.915 billion. However, the income from the tobacco industry is not enough. Smoking is hollowing out the root of our young generation. Why is public health not a priority for the government, he added?
Mr. Khalil Ahmed, Project Manager, SPARC said, that tobacco industry manipulated policymakers in order to fill its coffers at expense of lives of approximately 170,000 people who die due to diseases caused and aggravated by usage of tobacco products. He further stated that tobacco industry repeatedly urged the government to decrease Federal Excise Duty through a differentiated excise structure but without any increase of revenue commitments.
SPARC’s Project Manager added due to this extensive lobbying, there was no increase in taxation on tobacco products for fiscal year 2021-22. Heavy taxation on tobacco products is needed to not only reduce the tobacco consumption and its accessibility but also to keep the minors away from tobacco.