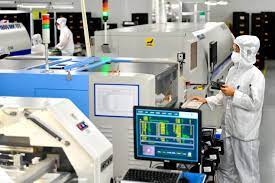 China’s gross domestic product (GDP) registered a 9.8-percent growth year on year in the first three quarters of 2021, which exceeded the projected target of over 6 percent for GDP growth this year. Enjoying sound momentum and fundamentals for long-term growth, the Chinese economy continues to recover from the COVID-19 pandemic and expand.

Besides the size and speed, the improving structure and quality of the Chinese economy during the first three quarters should be given due attention.

Projected growth rates of major economies in the world have fallen continuously in the second half of this year due to the disappearance of the base effect, the impact of the COVID-19 pandemic, and increasing downward pressure.

Against such a background, the Chinese economy showed strong resilience in the first three quarters of this year. The resilience has been reflected in its ability to resist risks as well as the adjustments to and improvement in its structure.

Besides, investment in high-tech industries and social sectors in the country grew rapidly, and the total value of the country’s foreign trade in goods logged a 22.7-percent increase from January to September year on year. In particular, exports of mechanical and electrical products registered a year-on-year growth of 23 percent in the period. The country witnessed continuous improvement in its trade structure.

Moreover, newly added urban jobs across the country and per capita disposable income both enjoyed upward trajectories during the first three quarters of this year, providing the steady underpinning for the fundamentals sustaining the sound momentum of the economy.

Continuous accumulation of factors concerning the quality of economic growth and the robust growth of new driving forces for economic development has effectively offset downward pressure on the Chinese economy.

On the supply side, China’s high-tech manufacturing enterprises above designated size achieved a 20.1-percent growth year on year in value-added in the first nine months of this year; the contribution of the service sector to the country’s overall economic growth during the period was 1.2 percentage points higher than that in the first half of this year; new industries and new business models have further promoted industrial development during the first three quarters of this year.

On the demand side, the contribution of final consumption expenditure to China’s economic growth during the first three quarters of this year was 3.1 percentage points higher than that in the first half of this year; people’s consumption expenditure on commodities and services featuring consumption upgrading and investment in high-tech industries saw relatively rapid growth in the first nine months of 2021; the structure of demand continued to improve during the period.

The continuous increase in the certainty for growth of a series of prospective indicators has made the “likely” solid economic growth for some time more of a certainty.

China needs to tackle various external and domestic uncertainties with the certainty of its economic development. In the future, it will be more critical for the country to invigorate the market, bolster growth drivers, and unleash the potential of domestic demand so that it can continue keeping the ship of the Chinese economy sail forward steadily.

At the macroscopic level, the country can stimulate market vitality by giving priority to supporting the development of the real economy and small and medium-sized enterprises through flexible use of structural tools and coordination between proactive fiscal policies.

At the meso level, China should give full play to the role of market-based mechanisms, continue to tap into emerging new forms and models of business as well as new industries, and keep a balance between stabilizing growth and preventing risks.

Meanwhile, it needs to attach great importance to the goal of peaking carbon emissions by 2030 and achieving carbon neutrality by 2060 while pursuing economic growth. Through scientific and rational approaches, such as strengthening overall planning for regional development, improving the carbon trading market, increasing the utilization rate of traditional energy sources by leveraging new technologies, and promoting the replacement of traditional energy sources with new energy sources, China can advance the realization of relevant targets in an orderly manner and boost the development of new driving forces for high-quality development.

The fundamentals sustaining China’s long-term economic growth remain unchanged, so does the strong resilience of the economy that underpins its steady recovery and stable growth.