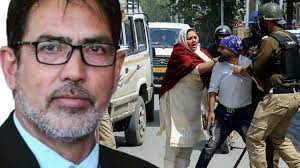 Taking part in the debate held under Item-4 during the 48TH Session of Human Rights Council Geneva Mr. Wani while speaking on behalf of the World Muslim Congress briefed the world audience about the worsening political and human rights situation in the held territory. He regrettably noted that the bloodshed and violence in the region continued unabated despite the fact that world human rights watchdogs raised their concern over the situation in the region.

“Almost all the credible outlets of international media and human rights organizations United Nations Special Procedures have been reporting on the reprisals- including killings, torture, intimidation and judicial harassment against activists and journalists, and other mass human rights violation in Occupied Jammu and Kashmir”, he said.

Regarding the Indian government’s willful denial not to adhere to international obligations the KIIR chief said, “India’s institutional complicity and cover-ups is an open secret now but New Delhi is still uninclined to refrain from hiding its crimes”.

He said that on one hand, the Delhi-based jingoistic media channels were being facilitated for distorting facts and spreading lies about Kashmir while on the other the voices of Kashmiri are muzzled for not toeing the pro-India line.

About use and abuse of draconian laws aimed at silencing the independent voices in Kashmir, he said, “On September 8 the police in Jammu and Kashmir raided the homes of four Kashmiri journalists – Hilal Mir, Shah Abbas, Showkat Motta, and Azhar Qadri – and confiscated their phones and laptops, and Passports”.

These raids he said were part of the ruling Bharatiya Janata Party (BJP)-led government’s escalating crackdown on freedom of expression, association, and peaceful assembly since coming to power in 2014.

He said that it was high time that the council should step up its efforts to establish a commission of inquiry in line with the recommendations of OHCHR to investigate past and ongoing human rights violations in Indian-occupied Kashmir.