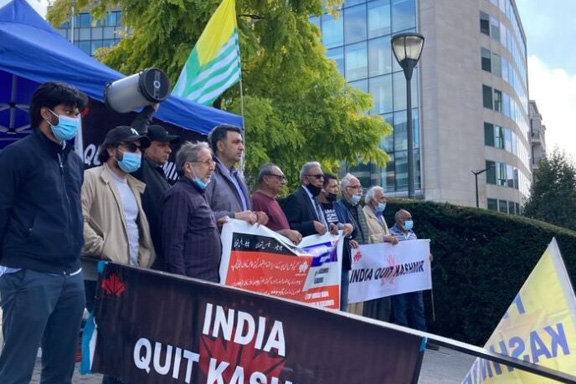 Brussels,(Parliament Times): A one-day protest camp was organized by Kashmir Council Europe (KC-EU) in front of European External Action Service in Brussels on Thursday.
People from different walks of life visited the camp and were briefed about severe situation of human rights in Indian occupied Jammu and Kashmir.
At the end of the camp a delegation led by Chair of Kashmir Council Europe Ali Raza Syed met representatives of EU External Action Service for South Asian Affairs. The delegation updated the EU’s officials concerning latest situation in occupied Kashmir and handed over a letter to them in the context. The memorandum urged the EU’s authorities to stop human rights violations and extra judicial killings in occupied Kashmir. EU should use its influence in order to release Kashmiri prisoners, end black laws in occupied Kashmir and stop India from changing demography of Jammu and Kashmir, the memo added.
Chairman International Forum for Justice and Huma Rights of Jammu and Kashmir Mohammed Ahsan Untoo from Srinagar, the capital of occupied Kashmir also addressed the participants of the camp. Informing about latest situation in the valley, he said, authorities started to terminate people who participate in the protest and their relatives. He asked United Nation to take serious notice of situation of
human rights in occupied Kashmir.

On the occasion Chairman Kashmir Council Europe (KC-EU) Ali Raza Syed, who was organizer of the camp on the occasion said, we raise voice against the Indian atrocities in the occupied Kashmir. The protest held two days before the Indian PM Narendra Modi’s address to the 76th Session of UN General Assembly (UNGA), which is scheduled to be held on September 25 in New York.
Chair of KC-EU said, we want to aware the world about Indian brutalities in occupied Kashmir and Indian propaganda in favor of its so-called claim of largest democracy prior to Indian PM address to the United Nation. Ali Raza Syed added, atrocities committed by the Indian forces against the oppressed Kashmiris is rapidly going and India is attempting to change demographic situation of Jammu and Kashmir as New Delhi has altered domicile
rules in the disputed territory. Indian aim of such action is to change the majority to minority in the Jammu and Kashmir.
Chair of KC-EU urged EU to pressurize India to stop violations of human rights in occupied Kashmir, prevent genocide of Kashmiris, release all prisoners, withdraw its forces from Jammu and Kashmir and allow all international human rights organizations to visit occupied Kashir. EU should also force India to implement UN resolutions about Kashmir issue and other international agreements concerning human rights in Jammu and Kashmir.
Ali Raza Syed condemned the recent ban on travel of Kashmiri intellectuals and journalist from occupied Kashmir to other parts of the world and asked for immediate withdrawal of this embargo.

He asked International community including UN and EU to play their role for a peaceful resolution of Kashmir issue through a process participated by the Kashmiri leadership.