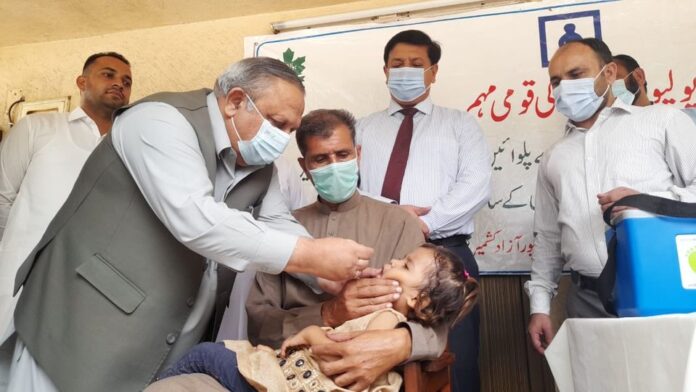 Like rest of Azad Jammu Kashmir, a total of 64700 children under five years of age would be administered anti-polio vaccine during the 5-day nation-wide campaign in Mirpur district launched across AJK on Monday, District Health Authorities said.

The campaign was launched across AJK by the State Health Services Deptt. with the coordination of the World Health Organization (WHO), disclosed Mirpur District Health Officer Dr. Fida Hussain while talking to this Correspondent here on Tuesday unveiling the salient features of the immunization campaign against polio in the district.

Dr. Fida told that no case of polio disease has emerged any where in Azad Jammu & Kashmir since last 21 years.

The DHO said that Mirpur district was comprising the total population of 4,38,319 persons which included over 64 thousand children of under five years of age who will be immunized with polio vaccine and vitamin ‘A’ drops at 14 transit points and 44 fixed centers across Mirpur district.

The district, he said, has been remarked into four zones with the induction of one supervisor in each zone to implement the drive/

Elaborating the district-wise anti-polio drive, Dr. Fida Hussain further said that a total of 384 mobile teams of paramedical staff involving over 900 para-medical workers have been constituted and 33 fixed centers have been set up in the district to immunize the children with the anti-polio vaccine.

The mobile teams, he said, will visit door to door by strictly acting upon the already devised SOPs in view of the still prevailing but controlled COVID-19 in the state, to administer anti-polio drops to children under five years of age.

Dr. Fida pointed out that in view of the apprehensions of the re-emerging of the novel-corona virus no any transit point has been set up this time of the anti-polio drive in AJK including Mirpur district.

The DHO advised the parents to cooperate the visiting mobile paramedic teams to make the national anti-polio campaign complete success.

Identical arrangements have also been made in other both Kotli and Bhimbher districts of Mirpur division for the immunization of children up to five years of age during the drive.