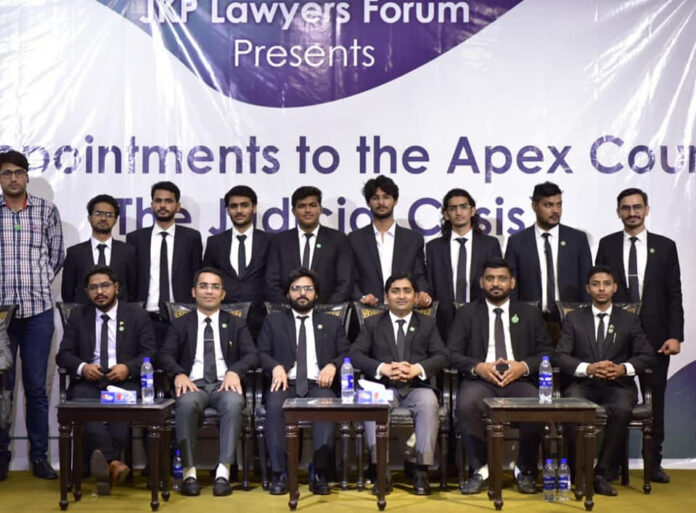 KARACHI: Speakers at a seminar organized under the auspices of the lawyer’s wing of Jinnah Ka Pakistan-JKP at the Jinnah auditorium of the City Cout shed light on the nagging judicial crisis that had triggered in the wake of the issue of elevation of the judges to the Supreme court. They said that now the people had started questioning the method of appointing the judges and then promoting them to the apex court.
In a panel discussion hosted by Zaheer Hussain Memon the chief of lawyers wing, renowned jurist, and Advocate of the Supreme court Haider Imam Rizvi said that common folk was mocking at the judicial system of Pakistan owing to the blatant loopholes in it and no one including the authorities concerned seemed serious to cater to these issues that were mounting with every passing day.
“The only way of appointing judges was to look over the seniority after he had qualified all other criteria encapsulated in the Constitution of Pakistan, if the unfair method continued this system would collapse under its own weight; he warned.
Barrister Omer Sommro said that the article of the constitution pertaining to the contempt of court was being used as a tool to suppress lawyers as well as the common people by the Judges without knowing the harsh consequences that would effuse from this practice. It would be quite astonishing for a lawyer that a judge before whom he was pleading the case had used a non-judicious way to reach here; he held.
President Karachi Bar Association Naeem Qureshi said that; Muhammad Ali Mazhar was the topmost competent justice of Sindh High Court, it would have been exceptional if he would have been CJ Sindh High court. The method of pick and choose being used nowadays would be detrimental for our system; He mentioned.
Former Judge and one of the notable jurists of the country Shahab Sarki and Advocate Syed Mustafa Shah urged young lawyers, law students, and the authorities concerned to play their part in resolving the judicial crisis once and for all.
The event was participated by newly enrolled lawyers, law students, and members of different social organizations. Towards the Advocate Zaheer H. Memon in his concluding speech thanked all the dignitaries and participants and vowed to work for the supremacy of law.