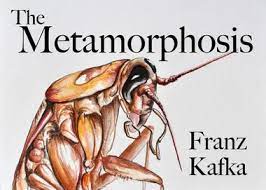 The Metamorphosis is a novella by Franz Kafka. The Metamorphosis is one of his most well-known works along with his published novel “The Trial”. The Metamorphosis is the story of Gregor Samsa, who wakes up in the morning after being overslept, he missed the early train that he was about to take for a business trip to discover that how he had turned into an insect. However, Kafka does not mention in the text that Samsa turns into a cockroach or not. Moreover, Gregor works as a salesman who travels a lot, and his family is dependent on him. He works hard to pay the debt that his father owed. But he wants to accomplish his dreams rather than doing this job which he can not leave due to family burden. Furthermore, the family struggles to meet day to day needs when Gregor is metamorphosed. His mother and younger sister start sewing, and his father also gets a job. In the beginning, they all hope that Gregor will be back to his proper routine soon. But when things start getting worse, they decided to get rid of him forever. Nevertheless, Kafka’s novella remains somewhat limited because of the absurd nature of the events in the book. Gregor turns into a huge bug for no clear reason at all. Kafka never talks about punishment of any sort or whether Gregor had been a ‘bad boy’ before that fateful morning turned into a bug.Despite all the absurdities in The Metamorphosis, the novella remains one of Kafka’s most well-known works. This is the absurdity actually what makes the novella so complex and interesting to read not everyone likes to read books like The Metamorphosis. However, it is still worth reading. You may don’t realise how you start enjoying a strange book.