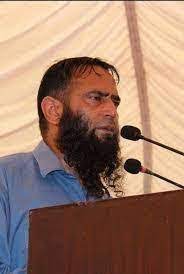 In a statement issued here on Friday, Uzair stated that Indian government should refrain from interfering the religious obligations of Muslims in India and particularly in occupied Jammu and Kashmir.

He maintained that Muslims will not accept the ban on sacrifice.

He said, “Ban on sacrifice is another worst example of usurpation on the religious rights of Muslims”

“Apparently Indian acts are targeting the religious rights of Muslims in India and occupied Kashmir” he added.

He said that Kashmir is a Muslim-majority state where followers of other religions are also free to practice their religious traditions.

He further said that under these circumstances, the people of the state will have to reorganize to thwart these heinous moves of India.

According to reports on Indian media, the Indian government has banned the sacrifice of large animals like oxe, cows and camels on the occasion of Eid-ul-Adha in occupied Jammu and Kashmir.

Victory in Sialkot approval of PTI by people : Governor