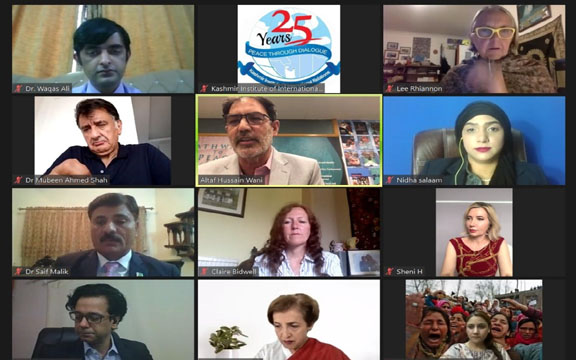 Call for an offensive diplomatic campaign to counter India’s concocted narrative on Kashmir,

Islamabad,     (Parliament Times) : Speakers at a Webinar, organised by Kashmir Institute of International Relations (KIIR) in collaboration with World Muslim Congress on the sidelines of 47thsession of the UN Human Rights Council, while raising alarm over the Indian settler-colonization strategies in Kashmir have termed it a serious existential threat to the region’s indigenous population.

The KIIR chief in his initial remarks while highlighting the dark aspects of India’s neo-colonialism said that the successive Indian governments had religiously pursued and practiced neo-colonial politics, which goes in synch with the incumbent BJP government’s Zionist-type policy to strengthen New Delhi’sgrip over the territory, taking advantage of its resources and deny its people the right to self-determination promised to them by international community.

Referring to the 5th August 2019 move, he said, “It was a classical example of the Machiavellian machination and mischief by the Indian state that has never hesitated in using the repressive state apparatus to erase the Kashmiris’ political, cultural and national identity.

After stripping the region of its semi-autonomous status, Mr. Wani pointed out that the BJP government launched an excessive and wholesale constitutional onslaught against Kashmir to wipe out the state’s homogeneous character.

Terming it as another step in India’s long history of colonising Kashmir, Wani said, “Since then an inclusive settler-colonialism drive has been under way to replace the indigenous population with a new society of settlers”.

About a series of new anti-Kashmir laws enforced in the state, the speakers said the BJP government extended over 200 laws to change the entire nomenclature of the disputed territory. “In addition, drastic changes were made in the state laws that besides opening floodgates for Indian settlersenabled them to have more capital to take over Kashmiri lands”, the added.

Underling the devastating impacts of Indian colonization on the Kashmiri people, the speakers said, “Illegal occupation of indigenous people’s lands in Kashmir has been central to the BJP’s settler-colonial project”. In order to pave a way for non-Kashmiris to settle in the region and buy properties, they said, the state’s land law, Revenue Act and Control of Building Operations Act, 1988 and the Development Act, 1970 were decisively amended to facilitate outsiders.

“Massive amendments were made in the Control of Building Operations Act
(CBOA), 1988, that gave sweeping powers to the Indian army to acquire more land in Kashmir. Referring to a report they said, “Over 4.30 lakh kanals of land in Jammu and Kashmir is already under the illegal occupation of Indian military and paramilitary forces.

“The amendments in CBOA-1988 and the Development Act, in other words mean more destruction, plunder of state-land and disempowerment of the locals”, they added.

“The amendments in the state’s domicile law, in particular, have been made to expedite the process of demographic changes in the occupied territory and the BJP’s long cherished goal of turning the majority of Kashmiri Muslims into the minority in their own homeland”, they said adding that the blatant usurpation of Kashmiris’ fundamental rights by India and its attempts to change their demography constitute a serious violation of international law.

“Along with land grab and resource extraction there are other dangerous aspects of settler-colonial state formations, which pose a serious existential threat to Kashmiris”, the speakers maintained.

Apart from these tactical moves the wanton killings of youth, systematic genocide & policy of dehumanization of indigenous people on the other hand depict terrifying and dark aspects of the Indian military occupation.

Urging the world community to take effective notice of India’s machinations, they said that the global community needs to realize the dangers in Kashmir and play their due role in resolving the lingering conflict to ensure durable peace and stability in the region.

The speakers stressed the need for an offensive diplomatic campaign at international level to expose India’s nefarious game plan and to counter its concocted narrative on Kashmir.

In order to sensitize the world about the Indian government’s machinations, the speakers suggested formation of joint working groups and investing more in intellectual capital to reach out to international think tanks, media houses and policy circles.

Who to be PM, would be decided by PM Khan: Sardar Tanveer

Who to be PM, would be decided by PM Khan: Sardar...

It’s not easy to be a girl