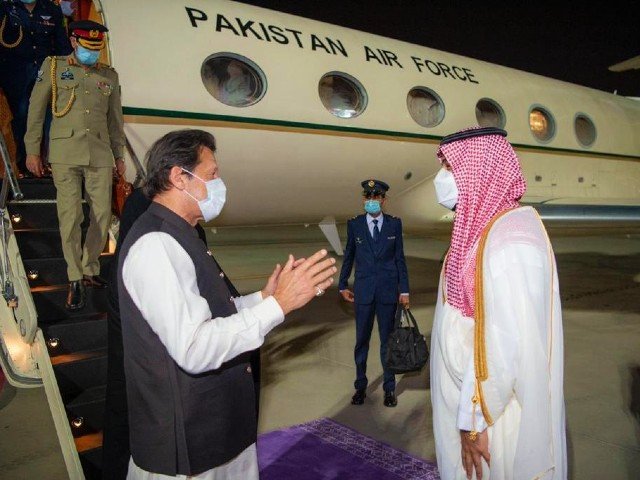 PM Imran Khan and General Qamar Javed Bajwa’s visit to Saudi Arabia and its impact on
Regional Scenario” &quot;The offer of olive branch by MBS to Iran is a pleasant development in the region , which is welcomed by Hassan Rouhani himself. After the departure of Donald Trump from White House , MBS feels that foreign policy of his country needs drastic changes to combine his position at internal and external fronts. The visit of General Qamar Javed Bajwa, who has already reached KSA for weeks back visit, has immense importance after a “cold period” of Pak-KSA relationship, when MBS asked Imran Khan to return three his installments of loan granted by KSA to uplift the Pak Economy at the early stage of PTI’s Government.
Immediately, responded by Imran Khan, two installments were returned with the help of
China, while third installment was stopped by KSA itself. When MBS realized that it would not create any adverse impact on Pakistan, rather KSA would lose the warmth of Diplomatic relationship of Pakistan and its Nation; the latter is religiously connected with the Holiest places at Mecca and Madina. The recent revelation of COAS during meet the press regarding Indo- Pak Relation that India is ready to hold talks with Pakistan on almost all longstanding issues, including Kashmir. Probably UAE is the facilitator and providing her soil for backdoor diplomacy, As media reports revealed that DG ISI General Faiz Hameed conducted meetings with his counterpart and other Indian security managers.
As media, sources believe that MBS has started direct of back door diplomacy to restore the relationship with, apparently, opposing countries like those of Iran, Syria and even Turkey.
Tayyab Urdgan is considered, as planner of new Islamic block, which will gain immense
importance after 2023 Treaty of Lausanne will complete its 100 years. Prior to the visit of
Imran Khan Turkish President Tayyip Erdogan and Saudi Arabia&#39;s King Salman bin Abdulaziz discussed bilateral ties in a call on Tuesday (4 May), the Turkish presidency said, the second conversation between the two leaders in less than a month. Pakistan is the only Islamic country, which can play a better reconciliatory role among KSA, Turkey and Iran. So at the same time Chine huge investment in Iran is an eye-open personification for USA too, as Joe Biden Administration has also started to have better relations with Iran, as prevailed during the tenure of President Obama. Pakistan needs hectic diplomacy in Middle East to normalize the relations among Muslim countries; more so, it will directly benefit Pakistan to make understand the importance as an only nuclear Muslim country and to protect the CPEC venture as a national interest. The resolution of European Union against Pakistan’s GSP plus status can be discussed with Muslim leaders on the pretext of Islam phobia and Blasphemous caricatures to get a joint support against the EU initiatives.
King Suleman has fully realized that, in case of any aggression against KSA from any Muslim country, Israel and USA will not be the emancipator, though Saudi Defense System is controlled and managed by Pentagon. Pakistan, being a Muslim nuclear state with a robust disciplined Army, has already protecting the strategic and security interests of KSA. The coming weeks will be very important for Pakistan’s diplomatic managers.
(-The author is Coordinator Youth Parliament Pakistan ( ISB, Rwp))

The dangerous wave of Covid-19