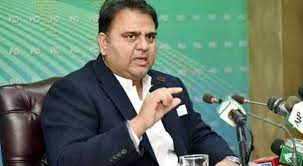 ISLAMABAD:    Information minister Fawad Chaudhry has said the government employees should have fear of accountability and even the most powerful people are not exempted from the accountability.

In a statement here Tuesday he said the accountability policy of Prime Minister (PM) Imran Khan is very clear. All the citizens are equal in the eyes of law.

No matter they are from opposition or members of cabinet or bureaucrats or from any other institutions, investigation will be made if the allegations are leveled against them. The norms of accountability will apply, he added.

He went on to say this is the change of system which was promised.

The commissioner confirmed the information in his preliminary investigation, he said adding as per preliminary report former commissioner Rawalpindi and several more officers were involved in this scam. The matter be referred to respective institutions for further investigation. No evidence has been found on involvement of any minister or advisor in this matter.

It could be done in Imran Khan government that if allegations are leveled then the investigations are must, he remarked.

During PML-N and PPP regimes the media raised hue and cry in such cases but it fell on deaf ears, he underlined.