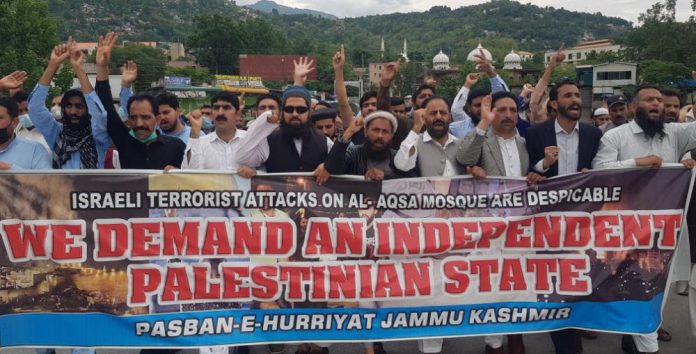 S. A Haidri
Muzaffarabad: People in Azad Jammu and Kashmir under the aegis of Pasban-e-Hurriyat held a rally against Israeli forces barbarism and in solidarity with the Muslims of Palestine.

A large number of people participated in the protest while holding banners and demanding the establishment of an independent Palestinian state.

Speaking on the occasion, Chairman Pasban-e-Hurriyat Uzair Ahmad Ghazali said that world must establish a free and independent Palestinian state.

He maintained that the Israeli attack on Al-Aqsa Mosque and Muslims is the open testimony about usurpation of religious rights.

Ghazali reiterated that the OIC should formulate a solid strategy against Israeli terrorism.

“People of Kashmir stands shoulder to shoulder with their Palestinian brethren”,adding that the United Nations must take stern notice Israeli attacks on innocent Palestinians.

Parliament Times - June 23, 2021 0
Lahore,  (Parliament Times) : In line with the Clean and Green Pakistan initiative of Prime Minister of Pakistan, the National Transmission and Despatch Company...