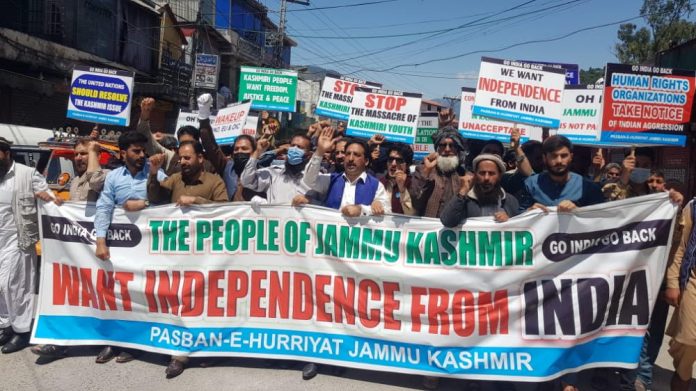 S. A Haidri
Muzaffarabad: A protest rally was held under the aegis of Pasban-e-Hurriyat Jammu and Kashmir against India’s illegal military occupation in occupied Jammu and Kashmir besides human rights violations and forced partition of the state.

According to details, protest was staged in the capital of Azad Jammu and Kashmir (Muzaffarabad) where people were chanting slogans against Indian tyrant activities in IOK for turning the Muslim majority state into a minority.

Protesters gathered at Burhan Wani Shaheed Chowk where they held banners and placards with slogans in favor of Kashmir’s independence and marched towards Gharipan Chowk where they set the Indian flag on fire.

While addressing the gathering, speakers said that India has been illegally occupied the disputed state for the last seven decades.

They maintained that during the illegal military occupation, India severely violated the political, religious and social rights of the people there.

“Tens of thousands of civilians have been martyred and thousands, including women, children, youth and the elderly, have been imprisoned” they voiced.

The speakers said that India has committed a great act of terrorism by forcibly dividing the state on August 5, 2019.

Rejecting the Indian move to destroy the identity of the people of the state, the speakers said that despite 623 days of military siege, all kinds of oppression and violence, India has failed to crush the spirit of freedom of the Kashmiri people.

“The Kashmiri people are still in mourning for independence from India”, they added.

They reiterated that the Kashmiri youth are still lighting up the candles of independence by offering their warm blood.

The speakers called on the United Nations to play its role to refrain India against inhumane laws such as AFSPA, POTA and TADA in the disputed state.

The demanded the United Nations to establish a free, fair and impartial referendum in the state of Jammu and Kashmir.