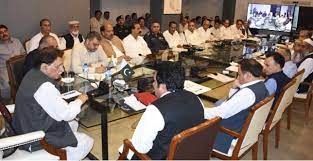 Addressing a news conference after presiding over the meeting of the Azad Jammu and Kashmir Cabinet here on Wednesday, he said that cabinet has approved the long awaited demands of the employees and has approved the recommendations in this regard.. He said the packages envisage the up gradation of fifteen thousand primary teachers, 8400 junior and 5500 senior teachers. He said the cabinet has approved the setting up of a health foundation and has accepted all the demands of the health employees including service structure of paramedic .He said cabinet has also approved the police administration allowance, secretariat allowance and technical allowance to the employees. The Prime Minister said that the government has announced the historical packages for the employees which is a reflection of the government commitment to resolve the problems of the employees so that they could fully concentrate to discharge their duties . He said the government is now financially strengthened and taking all possible steps for the wellbeing of the people of the state. The Prime Minister told media persons that the government has approved this package following the recommendations of the committee set up earlier under the chairmanship of the Azad Kashmir Chief secretary. Addressing the press conference the Education Minister Barrister Iftakhar Gillani said that over 28900 teachers will be benefited from this historical packages announced by the government as no example in the past and expressed the hope that the teaching community would fulfill their responsibilities after the announcement of this package .

The health Minister Dr.Najeeb Naqi and Minister Ch:Muhammad Aziz told the media persons that government has met all the demands of the employees within the financial resources of the government .They thanked the Prime Minister Raja Muhammad Farooq Haider Khan and state bureaucracy for announcing the historical packages for the employees. They said the present government during its tenure has fulfilled the commitment and promises made with the people and resolved the long awaited issue of the masses. They said the government has completed the mega developmental projects for the wellbeing of the people of the state.