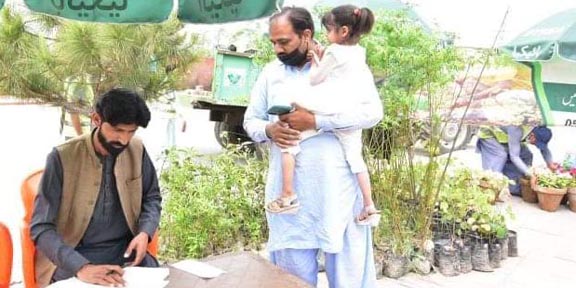 RAWALPINDI , (Parliament Times ) :  Parks and Horticulture Authority Rawalpindi have set up two special counters for free of cost distribution of various types of plants to the general public to make Prime Minister Imran Khan’s 10 billion Tree Tsunami project a success with full participation of the citizens. Citizens can also avail the facility of free home delivery of saplings.

This was told by the Vice Chairman of PHA Malik Abid Hussain while visiting the special counters of free distribution of plants set up in front of Allama Iqbal Park Murree Road and Liaqat Bagh Park.

Malik Abid Hussain said that PHA has worked day and night under the patronage and guidance of Asif Mehmood, Advisor to the Chief Minister Punjab and Chairman PHA, to produce these plants in its own nurseries, which include a wide range of varieties of the plants.

“The Parks and Horticulture Authority Rawalpindi have also placed all the flower pots on the divider line of Murree Road, which were prepared for exhibition in Jash e Baharan programmes”, he added saying that we have taken the closure of parks owing to COVID-19 as an opportunity to did our work. He said the process of making the parks natural green has entered the final stages of completion owing to the closure of the parks. Work will be continued gradually and continuously to further enhance and maintain this fascinating natural beauty created in the parks.

The staff of PHA has worked day and night under the direction of Chairman and Advisor to the Chief Minister Punjab Asif Mehmood to make the parks really natural green and all citizens will be surprised and extremely satisfied to see the park after opening, he mentioned.