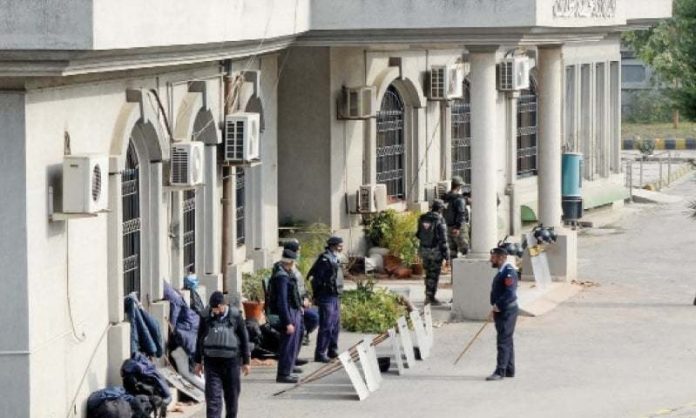 ISLAMABAD:    Supreme Court (SC) has ordered to get vacate the F-8 Football ground from the lawyers immediately besides demolishing the illegal chambers of the lawyers therein.
SC has rejected the petition filed by Islamabad Bar Council (IBC) and upheld the Islamabad High Court (IHC) decision for demolition of lawyers chambers illegally set up in F-8 Kutchery football ground Islamabad.

The court has also rejected the lawyers plea for giving them time till the provision of alternative place.

A 3-mmeber bench of SC presided over by the Chief Justice of Pakistan (CJP) Gulzar Ahmad took up for hearing petition filed by IBC against the demolition of lawyers illegal chambers in F-8 Kutchery Tuesday.

CJP remarked under what grounds we should allow to exist illegal chambers. Lawyers have no claim on football ground. The lawyer whosoever has to conduct legal practice he should set up his office some where else.

Lawyer, Shoaib Shaheen told the court during the hearing of the case that the courts are functioning too in football ground.

CJP remarked if any court is functioning in football ground it should also be demolished.

The court dismissed the appeal plea filed against the IHC order on demolition of illegal chambers of the lawyers.

COVID-19 at sharp rise in IIOJK;

Schools and the third wave of Covid-19