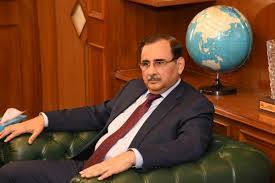 Mian Anjum Nisar hopes Pakistan to receive record remittance inflows of up to $28b this year,

Federation of Pakistan Chambers of Commerce and Industry’s ruling group Chairman Mian Anjum Nisar has expressed the hope that the capacity expansion in industrial sector along with remittances’ growth will push a long-term growth momentum at fast velocity.

He said that Pakistan’s current export potential is standing at around $26 billion while monthly exports can be lifted to the volumes of around $2.3 billion from present figure of almost $2 billion. He said that the country received $14.203 billion remittances during the first half of the financial year 2020-21, against $11.37 billion in the same period last year, showing a strong growth of 24.9 percent, which is the highest half-yearly growth since financial year 2006-07.

He expressed the hope that overseas Pakistanis residing in Gulf states in general, and the UAE and Saudi Arabia in particular, are likely to maintain an upward momentum in remittances, as they contributed 60 percent of the total inflows during the July-Dec 2020 period.

He said that hopefully Pakistan would receive record remittance inflows of up to $28 billion this year. This comes, as initiatives launched by the government and central bank to facilitate overseas workers, have started yielding positive results despite challenges posed by the Covid-19 pandemic.

Mian Anjum Nisar stressed the need for extending further facilitation to the business community, especially the small and medium entrepreneurs, so they are encouraged and do not face any financial issues.

He asked the FBR to simplify the mechanism introduced for the payment of refunds, so that the small and medium industry should not feel any difficulty in receiving the outstanding amounts. He said the economic stability and provision of job opportunities to the youth should be the highest priorities of the government.

The FPCCI former president and BMP Chairman said that the stage is now set for greater stabilization and enhanced domestic productivity that would definitely ease the ever-soaring inflation, boost businesses and create more employment opportunities, as it is the fact that the general public has been suffering due to rising inflation and unemployment.

He said that the SBP’s concessionary financing facility for plant and machinery imports is attracting an overwhelming response, especially the efforts of the SBP to promote economic growth in the country and provide liquidity and other support to businesses during Covid-19 are really appreciable.

He said the central bank has taken various steps to mitigate the impact of corona virus on economic growth. Since the onset of pandemic-related economic pressure, reducing policy rate from 13.25 per cent to 7 percent, besides allowing one-year extension in principal payments along with rescheduling and restructuring of loans without affecting the credit history of borrowers. He observed that the demand was contained owing to corona pandemic globally which would now pick up after the two years of slowdown, as the steel, cement a lot of other construction allied industries are showing positive growth.

He also warned that agri sector has still been proving to be the weakest link in the current macroeconomic planning and strategies because locust attacks, poor governance, bad planning, climate change and lack of investment in seed technology and agri research have already resulted in shortage of wheat, sugar and cotton. Moreover, the import bill of cotton would also be substantially high owing to record low production.