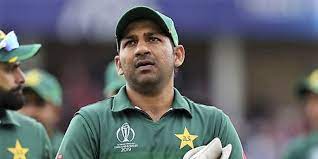 Islamabad:    Former Pakistan skipper Sarfaraz Ahmed on Saturday retorted to an apparent sub-tweet by veteran allrounder Mohammad Hafeez, saying that every cricketer who represents the national side “is number one for Pakistan”.
Sarfaraz was responding to a tweet by Hafeez, where the latter had lauded Mohammad Rizwan for his maiden Twenty20 century and said: “Wonder how long you need to prove that you are NO1 wicketkeeper/Batsman in Pakistan in all formats of the game. Just asking.”
He went on to extend support to Rizwan and said: “We are all behind Rizwan and wish that he plays many more amazing innings for our beloved country.”
The former captain added that “even in future, whoever gets a chance [to play for the team] will be number one for Pakistan. We expect nothing but positiveness (sic) coming from an international player who has played so many games for Pakistan. #JustSaying.”
Soon fast-bowler Mohammad Amir joined in, recalling that it was under Sarfaraz’s captaincy that Pakistan remained the top T20 team for two years and won the Champions’ Trophy in 2017.
Later in the day, Hafeez posted yet another tweet without naming anyone, saying, “Shallow minded approach EXPOSED!”