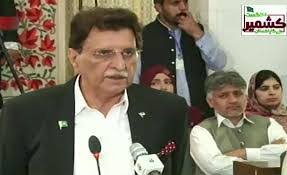 MUZAFFARABAD,   (Parliament Times) :   The Azad Jammu and Kashmir Prime Minister Raja Muhammad Farooq Haider Khan has paid rich tributes to the supreme sacrifice offered by Shaheed Maqbool Butt for the cause of Kashmir liberation and said that his sacrifice has given a new dimension to the liberation movement.

He said Shaheed Maqbool but was a shining star of the liberation movement and will always remain a guiding factor for those struggling against brutalities of Indian forces and for the supreme cause of the liberation of the motherland from Indian clutches.

Shaheed Maqbool Butt devoted his whole life for the liberation movement and has refused to bow his head before Indian despotic rules, the Prime Minister added.

He said Burhan Wani, Ishfaq Wani and Afzal Guru were also the heroes of the Kashmiri nation and Kashmiri would follow their foot print and would also continue their struggle till the complete liberation of Occupied Kashmir from India.

He said Kashmiri people in Indian illegally occupied Kashmir are under military siege since 5th of august 2019 while Indian forces have intensified the reign of terror on innocent Kashmiri to crush the freedom movement.

The Prime Minister said that India has failed to crush the indigenous freedom movement with the use of military might and has also failed to break the will of the Kashmiri people.

He urged the United Nations to fulfill its pledge and grant them their agreed right to self-determination.