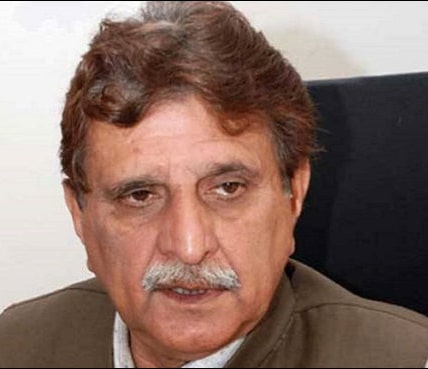 MIRPUR, [Parliament Times]: Azad Jammu and Kashmir Prime Minister Raja Muhammad Farooq Haider Khan said on Tuesday that Indian expansionist designs have jeopardized the peace of the entire region and urged upon the international community to take notice of the gruesome human rights violations of the brute Indian forces in Indian Illegally occupied Jammu and Kashmir.

In a statement issued on the martyrdom anniversary of renewed Kashmiri Hurriyet leader Muhammad Afzal Guru here on Tuesday he said that Indian Supreme Court has admitted that Afzal Guru was not involved in any crime and was judicially murdered. He said that assassination of Afzal Guru is actually the murder of justice and is slap on the face of justice.

He said after judicial murder, his dead body was buried in the jail which was an extreme example of repressions and extremism. The Premier said Afzal Guru was a hero of Kashmiri people and he launched a struggle for granting the right to self determination to Kashmiri people in accordance with the United Nations resolutions. The Prime Minister called upon the world community to break their salience over the continued repressions of Indian forces and take notice of Black laws enforced by the Indian government to crush the indigenous freedom movement launched by the people of occupied Kashmir for attaining their fundamental right to self determination.