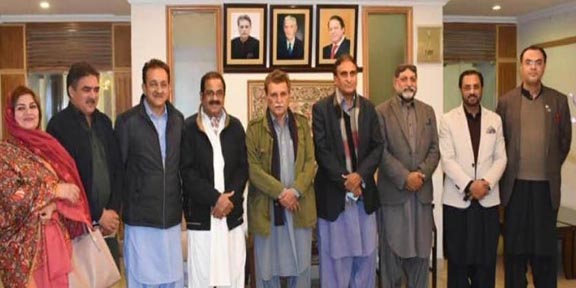 MUZAFFARABAD,   (Parliament Times) : A delegation of Pakistan People Party (PPP) Azad Kashmir led by its President Ch Latif Akbar called on the Azad Jammu and Kashmir Prime Minister Raja Muhammad Farooq Haider Khan here on Monday, and discussed the matter regarding the holding of public gathering (Jalsa) by the PDM in connection with the solidarity day on 5th of February in Muzaffarabad.

The meeting decided that this gathering will be purely non-political and will be addressed by all the political leaders to express complete solidarity with the people of occupied Kashmir.

Speaking on the occasion the Prime Minister said 5th of February is being observed to express complete solidarity with the people of occupied Kashmir every year to draw the world attention towards the Indian forces atrocities and gruesome human rights violations by the brute Indian forces in occupied Kashmir.

He said the public gathering of PDM in Muzaffarabad is aimed at expressing complete solidarity with the people of occupied Kashmir who were in military siege since 5th of August 2019 and have been struggling for the implementation of their fundamental right to self determination.

Meanwhile talking to a delegation of the Muslim league (N) the Prime Minister urged them to extensively take part in the public meeting of 5th of February in connection with the solidarity day without any political affiliations.

He said people of Azad Kashmir had lined their destiny with Pakistan on 19th July 1947 by passing historical accession to Pakistan resolution.

He paid rich tributes to the people of occupied Kashmir for their unprecedented sacrifices against the brute Indian forces and adding a new chapter in the freedom history.