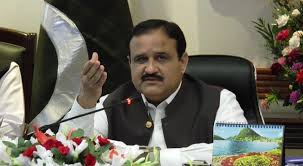 LAHORE: The fertile land of Sahiwal has, rapidly, emerged as the administrative and trade hub as it has a strong potential of agro-based industries.

This was stated by Chief Minister Punjab Sardar Usman Buzdar while addressing a ceremony held to start mega development projects in Sahiwal on Friday.

Giving the details of development work, the CM said that peripheral areas of Harappa and Chichawatni will also enjoy the fruits of development as a two billion rupees package has been announced for each area. The development package includes numerous projects of water supply, underpass and roads’ construction, wildlife park, tehsil sports complex, grounds, sewerage and provision of health and educational facilities, he added. Sahiwal has become a focus of attention of PTI as I have conducted more than five visits to this city to hold meetings with people from a cross-section of society. My team is working to implement feasible recommendations, the CM added.

The chief minister emphasized that cities are being transformed to enjoy modern facilities adding that provision of modern municipal services is being started in Sahiwal with a cost of Rs 18 billion under Punjab Intermediate Cities Improvement Investment Program. Government has also saved a sum of 11 crore rupees through open international tendering, he added. Sahiwal and Sialkot will emerge as engines of growth as a waste management academy and waste segregation plant have been inaugurated in Sahiwal along with the start of Ehsaas Program, Hunarmand Nojawan Program and Punjab Rozgar Scheme. Meanwhile, it has also been planned to provide the best municipal services in seven other cities, he disclosed. The foundation stone of 120-bed Sahiwal institute of cardiology has been laid along with upgradation of a teaching hospital. Along with it, a universal healthcare program is going to be started as well to give free treatment facilities to 12 crore people of the province, added Usman Buzdar.

The CM termed the incumbent government as farmer-friendly which started to devise agricultural policy way back in 2019 and informed that important agricultural projects have been started during the last two years with an amount of 90.70 billion rupees. Regrettably, Sahiwal is called the hub of livestock but nobody gave a damn to devising provincial livestock policy, he maintained. The credit goes to the incumbent government to prepare and launch the first livestock policy of the province before the upcoming budget. The government will also maintain liaison with the parliamentarians and other stakeholders for completion of development projects and the goal of composite development will be achieved under the leadership of PM Imran Khan, concluded the CM.