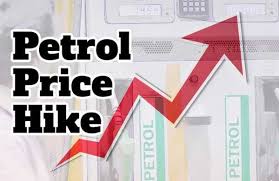 Najeeb Sowali
Petrol price hiked with sufficient oil-related revenue in the kitty, the government on Friday increased the prices of all petroleum products by three per cent to 6pc for the next 16 days. However, according to an announcement by the finance ministry, the ex-depot prices of petrol and high speed diesel (HSD) were increased by Rs3.20 and Rs2.95 per litre. The prices of kerosene and light diesel oil (LDO) were jacked up by Rs3 and Rs4.42 per litre. Similarly, in doing so, the government slightly increased petroleum levy on petrol, kerosene, and LDO. The levy on HSD was kept unchanged and simply the impact of higher international price was passed on to consumers. The ex-depot price of HSD was increased to Rs113.19 per litre from Rs110.24. Moreover, the government is now charging a total of about Rs42 per litre tax on petrol and HSD. Over the last many months, the government has been increasing petroleum levy rates instead of GST as the levy remains in the federal kitty while GST goes.