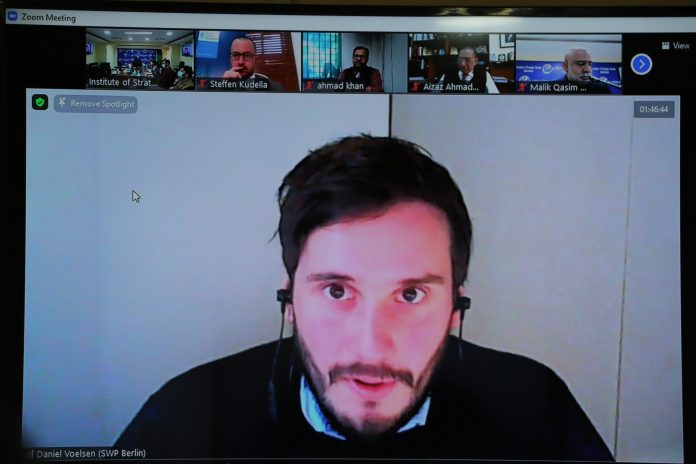 Islamabad : Dr. Daniel Voelsen, Senior Associate, German Institute for International and Security Affairs, in his presentation at the online workshop on “Internet, Artificial Intelligence and Quantum Technologies – Implications for Security and Foreign Policy” said that, “we are now witnessing intense political debates about the global future of the internet and fierce international competition over the leadership in artificial intelligence (AI).” The workshop was organized by the Arms Control & Disarmament Centre (ACDC) at the Institute of Strategic Studies Islamabad (ISSI) in collaboration with the Hanns Seidel Foundation (HSF) Pakistan on Wednesday.

Stressing on the security policy implications of the internet, AI, and quantum

While welcoming the participants, Ambassador Aizaz Ahmad Chaudhry, Director General ISSI, said that international regulatory processes vis-à-vis these technologies were much slower than the pace of defacto technological development. “We need to understand that how fast this spectrum of technological change especially the quantum change will take place and how the international community will adapt to this change,” he added.

In his remarks, Mr. Steffen Kudella, Resident Representative, Hanns Seidel Foundation Pakistan, said that technological developments such as digitization were and would be one of the greatest game-changers for the future of humanity. Whereas, Malik Qasim Mustafa, Director ACDC, said that AI and cyber technologies were going to change state behavior in major ways.

At the end of the workshop, Ambassador Khalid Mahmood, Chairman Board of Governors ISSI, stated that developing states had to raise awareness about the global technological transformations. “They should focus on engaging relevant stakeholders, invest in research and development, enhance public-private partnerships, and achieve indigenization in various fields of emerging technologies,” he said.