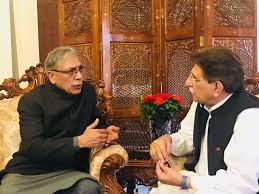 Talking to the Chairman of Kashmir Council Europe Ali Raza Syed, he said that it was due to unprecedented sacrifices of Kashmiri people and the struggle of overseas Kashmiri that Kashmir issue is in the sharp focus of the world attention.

The Prime Minister said that overseas Kashmiris are the ambassadors of Kashmir in their respective countries they should intensify their efforts in projecting the Indian forces repressions and plight of the Kashmiri people at international level.

He highly commanded the role of Chairman of Kashmir Council Europe and his team for their effective diplomacy and raising the voice of Kashmiri people at international level.

He said Indian has intensified the reign of terror in occupied Kashmir to suppress the voice of the Kashmiri people for attaining their fundamental right to self determination, but has failed in her nefarious designs.

He said Kashmiri people have added a new chapter in the freedom history and they would continue to shed their precious blood till the liberation of occupied Kashmir from Indian cruel clutches.

He said the people of occupied Kashmir are under Indian military siege since 5th of august last year but despite Indian repressions their moral are high and they would not compromise less than their liberation from India.