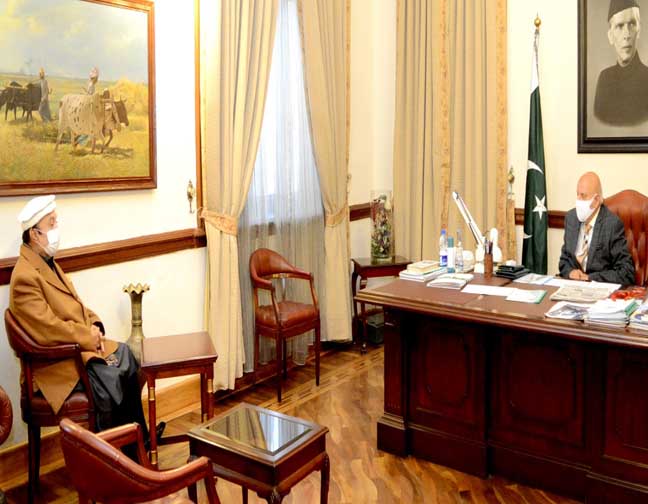 Lahore :  Punjab Forest Minister Sabteen Khan has called on Governor Punjab Chaudhry Mohammad Sarwar while Governor Punjab Chaudhry Mohammad Sarwar has said that even if the opposition fulfills its wish of Long March and resignations, the government will not be affected by it. There is no such thing as unity and consensus in PDM. There is a clear difference between them, he added.

According to details, Provincial Minister for Forests Sabteen Khan called on Governor Punjab Chaudhry Mohammad Sarwar at Governor House Lahore in which political and governmental issues were discussed.

Governor Punjab said that even Imran Khan’s opponents know that he will not be blackmailed. Everyone testifies to the honesty of Prime Minister Imran Khan. He only wants to see prosperous Pakistan and all government resources are being used only for the Public’s welfare. He said that PML-N and PPP have been in power for five years so the opposition should wait for the 2023 general elections instead of creating chaos in the country. Then the people will decide who they want to see in government and in opposition. He said that no government has ever ended due to the protests and sit-ins and this will not happen in future as well.

Chaudhry Mohammad Sarwar said that whenever it comes to accountability in the country, political opponents start making noise. They should prove their innocence in the courts instead of speaking out against the government. He said that courts and all institutions in the country are working freely and the government does not believe in any kind of political revenge.

Provincial Forest Minister Sabtin Khan said that the previous governments have been making only claims for the development of the people but the incumbent government is taking practical steps to solve the problems of the poor. Despite all the negative propaganda of the opposition, the public support is with the government’s policies.

Later on, a delegation of Pak-China Joint Chamber of Commerce and Industry led by its President SM Naveed called on Governor Punjab Chaudhry Mohammad Sarwar at Governor House, Lahore. During the meeting, the Governor said that the business community is playing a significant role in the development and prosperity of the country. He said that it is important to encourage investors to revive the economy. He said that the Chamber of Commerce and Industry has an important role to play in liaising between the Pak-China Economic Corridor and the Pak-China business community. He assured the members of the delegation that their issues would be resolved on priority basis.

Govt ready to discuss with opposition every issue except corruption: Governor Punjab

Govt ready to discuss with opposition every issue except corruption: Governor...

Parliament Times - January 20, 2021 0
Lahore:  Punjab Governor Chaudhry Mohammad Sarwar has said that the government can hold talks with political opponents on every issue except corruption. Even if...

Clashes between two nuclear powers over Kashmir is dangerous for world:...