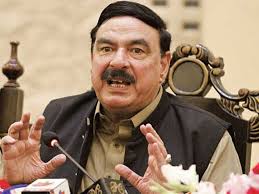 ISLAMABAD:   Railway Minister Sheikh Rashid Ahmad has said Prime Minister (PM) Imran Khan is not going to resign on March 31 in the face of opposition empty threats what to speak of January 31.

Talking to a private TV channel he said the resignation issue has moved from December 31 to January 31. PM Imran Khan is not going to tender resignation on March 31 what to speak of January 31.

He held that opposition will stage long march rather than giving resignation. They should come whenever they wanted, he added.

He underlined that even the program for long march by opposition has not been finalized. How can they set up reception camp earlier.

He warned if opposition takes law into their hands then law will take its course;

We will evolve strategy when opposition takes decision for staging long march to Islamabad, he pointed out.