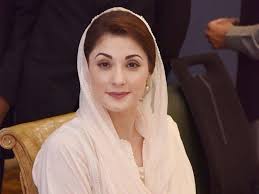 LAHORE:   Pakistan Muslim League-Nawaz (PML-N) vice president Maryam Nawaz has said that government wants NRO from Pakistan Democratic Movement (PDM) but we are not willing to have any kind of dialogue with the incumbent fake government.
Maryam Nawaz praised the struggle of Benazir Bhutto for Democracy and said that former prime minister Benazir Bhutto gave her life for the democracy and signed charter of democracy which changed the history of Pakistan.
She stressed on need of unity and solidarity in the country and said that government will have to go home no matter what.
Shehbaz Sharif is loyal to his brother and if he was not loyal to Mian Nawaz Sharif and the party, he would have been the current Prime Minister, she said.
The PML-N leader also said that PML-N has received resignations from 95 percent of the lawmakers. Maryam also said that she does not know how resignations of Murtaza Javed and Sajjad Awan reached Speaker because the resignations are to be submitted to party leadership by December 31.
On differences about PDM party leaders she said that different news start to emerge whenever Bilawal Bhutto Zardari does not attend any rally.
She said about participation in Senate polls and by elections that PDM will take decision regarding contesting the elections and PML-N will honor decision of the opposition’s alliance.

Parliament Times - May 12, 2021 0
ISLAMABAD:    Chairman Kashmir Committee Shehryar Khan Afridi has said Israeli bombardment on unarmed Palestinians is an attack on humanity. In a tweet on Wednesday,...

104 fatalities reported due to corona virus during last 24 hours...

Registration of 30-39 age group for COVID-19 vaccination to start from...